Last week, we learned that the Capitol building in Oklahoma, currently undergoing a renovation, would be adding a chapel to the second floor: 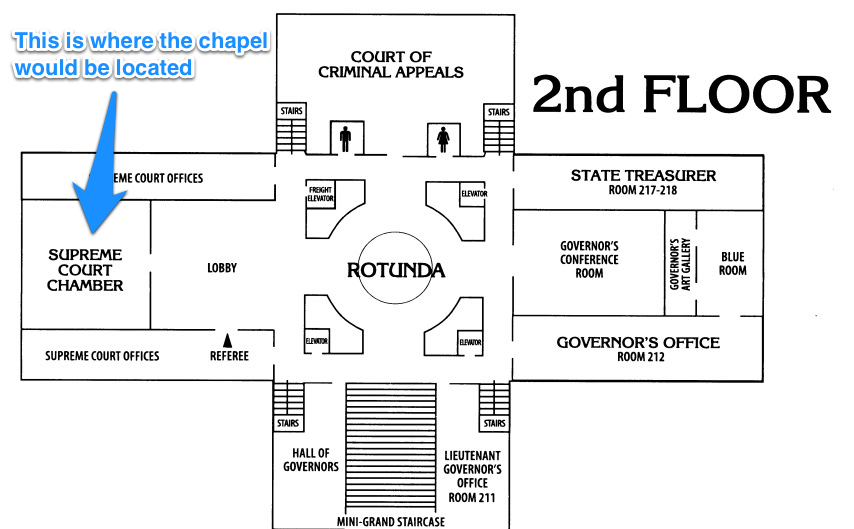 House Speaker T.W. Shannon (R-Lawton) was the architect of that addition:

At the time, Shannon’s spokesperson Joe Griffin tempered the outrage by saying the chapel wouldn’t be built if it was illegal:

“No taxpayer money has been spent on a chapel other than the ink that is on the blueprints,” Griffin said Tuesday. “If we are able to create a chapel, we would love to. But we are not going to do anything that is not constitutional.”

But, you know, that was a week ago.

Yesterday, Shannon wrote an op-ed for the Tulsa World explaining why the chapel deserved a spot in the Capitol building:

Recently, the idea of a chapel in the Oklahoma House of Representatives has been proposed. It would be a small, privately funded place that honors the rich history of faith and freedom in our state.

Fine print: Up yours, atheists.

It is deeply troubling that as soon as the idea of a chapel was put forward, the attacks began from those who wish to persecute and intimidate those who believe that God grants us our natural freedoms. Fringe groups, like the American Civil Liberties Union, bombarded the media with cries that a chapel would be unconstitutional. How could honoring the faith community and its contributions to our state be unconstitutional when we have already established that the preamble of Oklahoma’s Constitution evokes the name of Almighty God?

Because the U.S. Constitution says the government can’t establish or promote religion and it’s the rock to your scissors.

Oklahomans are a proud people of deep conviction and faith.

Except for the 12% of Oklahomans who aren’t religious. Whom Shannon prefers to ignore because facts contradict his rhetoric.

No serious argument can be made that a chapel “establishes” a state religion. If anything, a chapel would promote the “free exercise” of religion by those who work in and visit the people’s Capitol. Those who wish to exclude any display of faith from the public square are essentially attempting to twist the positive ideal of “freedom of religion” to mean “freedom from religious influence,” a notion that directly conflicts with the tradition of faith and virtue that has shaped our state and overrides the will of our people.

By that logic, we should build a shrine to atheism on the third floor and Shannon should have no problem with that. It’s just “free exercise,” after all, right?

Shannon is just begging for a lawsuit. His essay here is just evidence that he’s trying to promote religion through the government. If he believed it was legal, he wouldn’t have tried to secretly push the chapel blueprint through at the last second.

The comments section under his article, predictably, includes those who claim the opposition to his idea is steeped in racism.

(Thanks to Jarrett for the link)