Why Isn’t Pope Francis Bringing People Into the Pews?

Even though Pope Francis has charmed the socks off of even many hardcore atheists, a new analysis of data by the Pew Research Center shows that Francis’ popularity hasn’t led to more people sitting in pews on Sunday or even more people becoming Catholics in general. In fact, the data looks like the electrocardiogram of a dead patient: 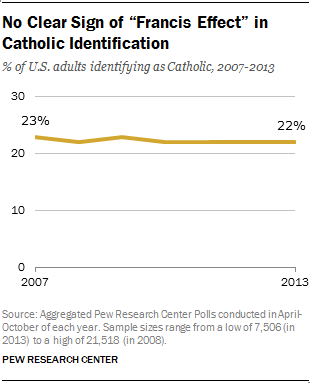 A new analysis of pooled Pew Research surveys conducted between Francis’ election in March and the end of October this year finds that the percentage of Americans who identify as Catholics has remained the same — 22% — as it was during the corresponding seven-month period in 2012. In fact, our polls going back to 2007 show Catholic identification in the U.S. has held stable, fluctuating only between 22% and 23%.

It’s not really surprising when you think about it.

Why would anyone become Catholic because of the Pope? Just because the boss is pleasant doesn’t mean the company is worth investing in. We’re still talking about the Church that covered up sexual abuse within its ranks, the Church that doesn’t allow women to become priests, the Church that condemns birth control and condoms and homosexuality and vasectomies. Who would want to join that?

More importantly, a new Pope — even a nicer Pope — doesn’t mean Catholicism has become any more true. If you didn’t believe you were eating the physical body of Jesus a year ago, why would you feel any differently now?

I suspect that the approval rating for the Church has gone up over the past eight months. But there’s no reason to think anyone’s itching to become a member.

November 26, 2013
Jewish Court Tries to Force Mother to Circumcise Her Young Son, on Penalty of Daily Fines
Next Post