How Much Money Did Atheists Raise for Disaster Relief After Typhoon Haiyan? November 26, 2013 Hemant Mehta

How Much Money Did Atheists Raise for Disaster Relief After Typhoon Haiyan?

A rundown of the bigger charity drives in our community:

The American Humanist Association’s Humanist Charities raised more than $25,000 in a single day: 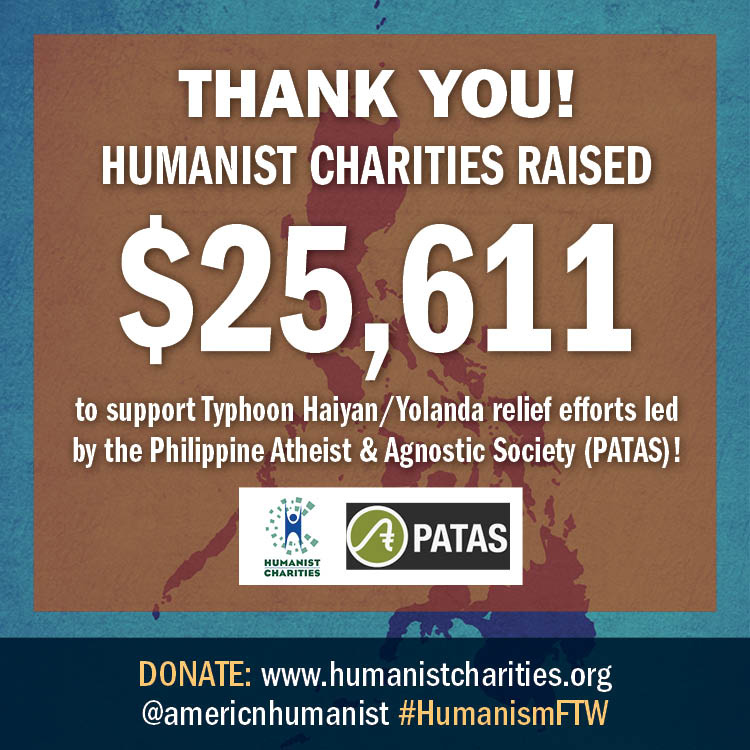 Volunteers from the Philippine Atheist & Agnostic Society (PATAS) — Cebu Chapter will be on Hilutungan Island in the town of Bantayan on Sunday, November 17, 2013 to pack and distribute boxes of food, water and supplies to Typhoon Yolanda/Haiyan victims.

The island of Hilutungan is one of the most isolated in the Philippines and was heavily devastated by the typhoon. Based on information received by PATAS, relief goods have hardly reached the area because of its location. PATAS is targeting to distribute 600-700 packs of relief good to families on the island.

The Center For Inquiry, through its Skeptics and Humanists Aid and Relief Efforts (SHARE) raised more than $35,000 for Oxfam in a span of two weeks:

100% of that money will go directly to Oxfam’s efforts, currently focused on clean water and sanitation for the millions affected by the super-typhoon.

Finally, the Foundation Beyond Belief’s Humanist Crisis Response program has raised more than $61,000 so far. $50,000 went to the Citizens’ Disaster Response Center, a community-based relief organization in the Philippines. The remainder of the money will go to Team Rubicon, a disaster response organization consisting of military veterans.

Thanks to everyone who’s pitched in. You’re making a tangible difference in a devastated area. Please don’t stop giving, no matter how you do it.

November 25, 2013
It Doesn't Matter Whether Theists Believe in an Actual Devil or a General Force for Evil; It's All Frightening to Me
Next Post