Did the Gay Waitress Who Claims She Received a Hateful Note From a Customer Fabricate the Whole Thing? November 26, 2013 Terry Firma

Did the Gay Waitress Who Claims She Received a Hateful Note From a Customer Fabricate the Whole Thing?

The bottom just fell out of a viral story that also made it onto Friendly Atheist a week and a half ago. 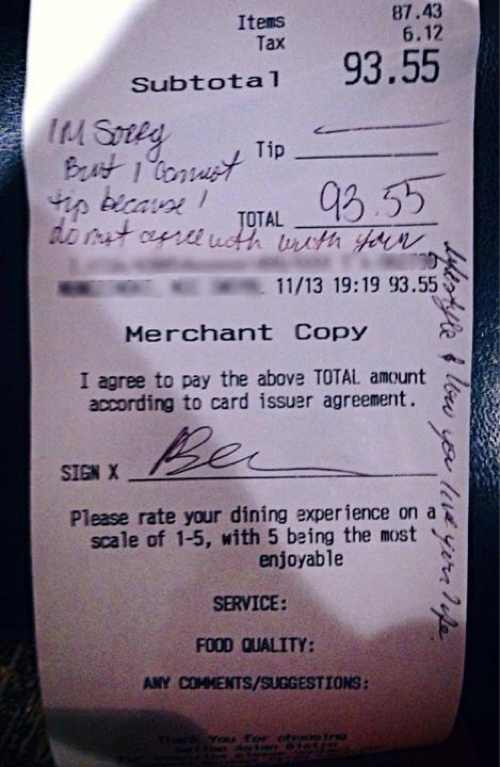 Waitress Dayna Morales‘ account of being stiffed on her tip by a customer who wrote on the credit card receipt that she did not agree with Morales’ “lifestyle” has been thrown into doubt. That’s because the still-unidentified woman and her husband contacted a local TV station and produced their own copy of the credit card receipt — with the same time stamp — that showed they left Morales an $18 tip on a $94 bill. More importantly,

They also produced a credit card statement showing they had been billed for the full amount of the bill plus the tip.

As for the homophobic note scrawled on the restaurant’s copy of the credit card receipt, the couple says they didn’t write it, and a flustered Morales claims she didn’t either.

Over at Gawker, commenter dollyrkr makes this observation:

The part that stumps me though is that the copy should say “reprint” on one of the checks. Whenever there is a reprint is says so. So, she may have printed it once, kept that copy, and then reprinted for the table, which means that it was premeditated.

The restaurant says it’s investigating. For now, Morales still has her job.

If she forged the receipt — perhaps in a reprehensible ploy to garner sympathy for LGBT people, or to collect donations from people who readily offered to help her — she will no doubt suffer the social, professional, and possibly legal consequences.

In any case, we can no longer support the story as it was widely reported on hundreds of reputable websites, and we sincerely regret passing it on.

November 26, 2013
In Downtown Chicago, Near a Life-Size Nativity Scene, a Scarlet 'A' Goes Up Alongside an Atheist Banner
Next Post