Christian Militia: ‘We Now Have Authority to Shoot Obama’

Leslie Salzillo, who blogs for Liberals Unite, was incredulous when she found this on a Facebook page for the Christian American Patriots Militia (already shared more than 500 times): 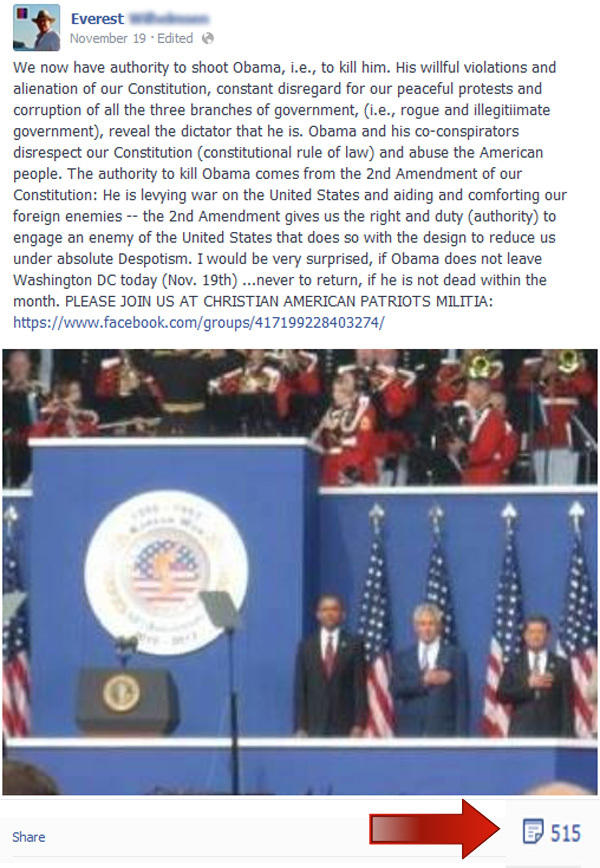 I don’t have full access to the CAPM (closed) Facebook page yet, but the public part alone is similarly unsettling. This is from the group’s “about” text:

These rogues and thugs [in the Obama administration] are in fact supplanting our Constitution with a communist Oligarchy of corrupt political and legal elites. Christian American patriots, this is no time to be silent nor to sit. (Romans 1:16) We must NOW RISE and FIGHT VIGOROUSLY to protect our nation and our posterity. Your children, grandchildren and great grandchildren depend on you. We need no further evidence that those we trusted are not honoring their oaths: Their oaths are not sacred to them—abusing us and disobeying God. Therefore, it is time that we remove them from their duties.

Removal = killing, apparently, and God is on board with that:

God used the army of Israel to slaughter untold numbers of men, women and children and can do that today. Obviously God tells us to seek peace, to love, to forgive, but you cannot relegate God to a “peace only” box. The fact is that God is unchanging, and inherent in that attribute is the very real possibility of Him calling for force, violence, and war — and what is necessary in those actions are humans. We, are the facilitators of those actions.

The statement about the President probably violates Federal law, which says that the proud patriots who issued it now face five years behind bars for making threats against the Commander-in-Chief.