It Doesn’t Matter Whether Theists Believe in an Actual Devil or a General Force for Evil; It’s All Frightening to Me November 25, 2013 Hemant Mehta

It Doesn’t Matter Whether Theists Believe in an Actual Devil or a General Force for Evil; It’s All Frightening to Me

Remember when Supreme Court Justice Antonin Scalia reminded all of us in an interview that he believes in the devil? 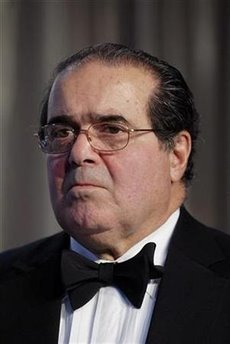 At the time, I wrote that I was appalled that anyone, included conservative Catholics like Scalia, could hold that ridiculous belief:

… Scalia believing in the Devil? Not as a metaphor, but as a physical being? Seriously?! It’s frightening to me that anyone would believe that, even though a 2007 Gallup poll said that 70% of Americans would agree with him.

… Scalia’s belief in the Devil belongs in the same category as thinking our world was created in only six days (several thousand years ago), that climate change is a hoax, and that Obama is secretly a Kenyan. They should all be greeted with a collective:

I stand by all that. There’s just no evidence of any supernatural being that promotes evil just as there’s no evidence for one that promotes good. To believe in the devil is to remove personal responsibility for any evil actions someone takes.

Someone robbed a bank? That wasn’t a bad personal decision. The Devil just got to him.

Someone cheated on his significant other? The Devil led him to temptation.

Someone’s gay? Let’s exorcise the demons out of him.

Tom Krattenmaker, writing for USA Today, suggests I should temper my frustration somewhat because Scalia probably didn’t mean to say he believed in a living/breathing/actual Devil, but rather more of an evil spirit of sorts:

Scalia, however, probably did not mean what Mehta thought he meant. When serious-minded religious people say they believe the devil is a “real person,” they don’t mean a physical being that prowls the planet sporting horns and a tail. In the Christian vernacular, “person” can mean an unembodied being that interacts with people and plays a role in the cosmic scheme. In a more liberal theological vein, it could be thought of as a force or pattern.

In this sense, is it really such a stretch to acknowledge the reality of the devil? Even those of us in the growing legions who live and speak in secular ways, and who would never be caught dead saying we “believe in the devil,” might admit that a bit of the devil lives and works in us. This we see when we do something cruel and selfish, or when we dehumanize other people on the basis of their belonging to some category different from our own.

It’s a distinction without a difference.

And it’s the same kind of reasoning certain Christians use for their belief in God, too: Of *course* the God I believe in isn’t a white guy with a beard who lives in the clouds. That’s silly! I believe in God as a spirit. I pray to that one and He guides me through life.

Umm… yeah, okay, whatever. It’s all the same delusional thinking. One’s just slightly more acceptable. I hope that people eventually become ashamed to admit believing in the spirit idea, too. There’s just no good explanation for why we all laugh off anyone who believes in a living/breathing Devil but act like everything’s perfectly normal when someone admits to believing in an evil “force” instead.

November 25, 2013
In Sacramento, an Astounding 55 Billboards with Atheist Messages Will Go Up
Next Post

November 26, 2013 How Much Money Did Atheists Raise for Disaster Relief After Typhoon Haiyan?
Browse Our Archives
What Are Your Thoughts?leave a comment