The Pastor Who Started the Whole Costco/Bible Controversy Is Ashamed at How Christians Have Reacted November 23, 2013 Hemant Mehta

You may have heard that Costco believes the Bible is a book of fiction.

I think readers sent me more links to this week’s Costco controversy than any other story they’ve sent me in a long time. I ignored it at first, telling them it was probably just someone moving labels around, not some Costco conspiracy. But the story pressed on…

It all started with this tweet by Pastor Caleb Kaltenbach:

Costco has Bibles for sale under the genre of FICTION Hmmmm…… pic.twitter.com/mLZVogkSfd 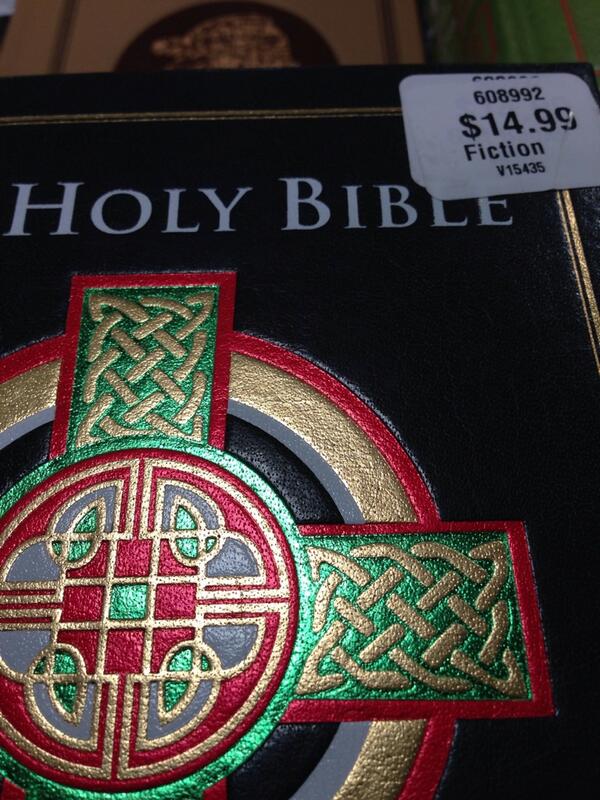 As amusing as that might be for atheists, my suspicions held up: Costco never approved the “mislabeling” of the Bible. Turns out it was just a contained mistake:

The warehouse chain said the distributor had made the error on a small number of Bibles. “However we take responsibility and should have caught the mistake.”

That should’ve been the end of the story. But, as you might expect, Christians jumped on the story like evangelicals on Chick-fil-A food. They called for boycotts, acted like they were being persecuted, and ignored the fact that the founder of the chain is a very devout Catholic.

If you got outraged over a labeling mistake, maybe it’s time to take a moment and ask if that’s the best approach. Maybe it’s time to ask if you need to be more discerning, less gullible, and need some new sources of information beyond constantly-outraged websites and social media outlets.

Let me add, when Christians are constantly outraged by fake controversies, we look foolish and have no credibility to speak into real issues.

Damn right, they don’t. To his credit, Kaltenbach, the pastor who took the picture that (to his shock) started this whole non-troversy, agrees that Christians have made a big deal out of nothing. This was supposed to be amusing, not a cry of oppression:

Let me be clear on this: I was NOT angry, outraged, offended, stunned, shocked, upset, gained a shattered worldview, or ________________ (you fill in the blank). I put the pic on my social media feed to EVERYONE, not just my “flock.” It was then a couple of days later that I was approached by the press about the photo.

… I specifically said [to the media] each time, “I do not think that Costco did this intentionally. I don’t believe there’s an evil mastermind genius working at Costco to undermine the authority of Scripture.” Unfortunately, people hijack and spin stories so they can get their own view on the matter across.

Kaltenbach should’ve known better. Did he really think Christians would just let this slide as an innocent mistake? Have they ever done that in similar situations before? He wants to spread the gospel of Christ. Instead, his tweet ended up making Christians act like parodies of themselves.

For that, I thank you, Pastor Kaltenbach. You made my job easier this week.

November 23, 2013
New Jersey Rejects Another Atheist License Plate, But Allows a Baptist One
Next Post