New Jersey Rejects Another Atheist License Plate, But Allows a Baptist One

The Motor Vehicles Commission of the state of New Jersey continues its war on nonbelievers!

Well, not so much a “war” as a kind of backward, archaic prejudice. You’ll of course recall the great saga of American Atheists’ Dave Silverman and his battle to exercise his right to wear his atheism on his license plate. After initial refusals to produce his plate, the New Jersey MVC relented, and there was much rejoicing.

But a new gauntlet has been thrown by the Garden State’s regulatory machine. This time, the aggrieved party is one Shannon Morgan, who attempted to get her own godless license plate as such: “8THEIST”

However, as you can see in the screen grab below, Shannon was thwarted. 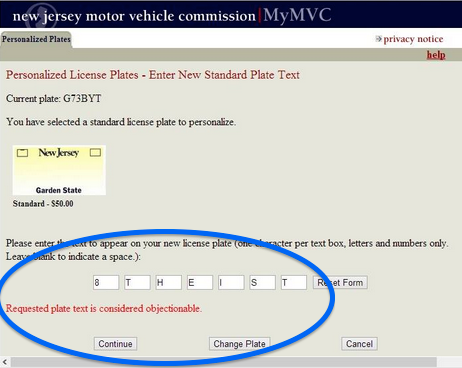 The decree from the MVC? “Requested plate text is considered objectionable.” That’s right, folks, indicating your atheism on your car is still “objectionable” to the state of New Jersey.

Shannon wondered what might not be considered objectionable by the MVC, so she gave this controversial word a shot, and you can see the results: 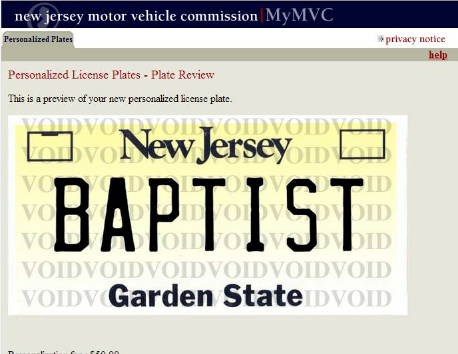 Shannon wrote on her Facebook post for this picture, “So apparently I can have THIS plate. This is getting interesting.” Yes it is.

So, in case there was any doubt, it’s not sectarianism or general religious references that are forbidden, but really just atheistic ones.

And here’s something interesting: Shannon had no idea about the Dave Silverman episode when she tried to get her heretical plate. Here’s what she told me:

I honestly assumed “ATHEIST” would have been taken already, so I had the idea to use the 8 for the A. It just popped up and told me it was “objectionable.” I tried again, same thing. Since atheism is my belief system, I figured I would try another belief system, because maybe it just wouldn’t allow any references to such. But “BAPTIST” was accepted. I was really surprised that wasn’t taken already, given how enthusiastic they can be…

I’ve now sent a letter and certified return receipt to the MVC. I told them that I’m sure that this has to be a computer error, and I’ve asked how I can get my plate.

So we’ll see what happens. But it looks like Silverman’s success in getting his atheist plate may have had more to do with his high profile, and the subsequent media shaming the MVC suffered, rather than any kind of change in policy. It was, in other words, a one-off.

Maybe if enough noise is made about this second and totally independent refusal, the MVC will officially change its tune.

(Many thanks to Michael Cluff, hero of this post, for tipping me off.)

November 23, 2013 The Pastor Who Started the Whole Costco/Bible Controversy Is Ashamed at How Christians Have Reacted
Browse Our Archives
What Are Your Thoughts?leave a comment