Fox News Ripped School Board For Nixing the Pledge of Allegiance — Even Though the Board Did Just the Opposite November 22, 2013 Terry Firma

Sioux Falls school board member Kent Alberty has had quite the week, what with the death threats and all.

From across the country, he and the four other board members received messages from upset Fox News viewers. Some of the missives were respectful in their criticism, but many more were nasty, even threatening. One anonymous correspondent proposed that the board be lined up against a wall and shot.

In an effort to restore some normalcy,

The Sioux Falls School District has removed the board members’ personal information from its web site for now, to discourage any more misdirected feedback.

What did Alberty and his colleagues do to deserve all that bile? That’s the crazy part. They decided to honor the proposal of a local war veteran to make elementary and middle-school students recite the Pledge of Allegiance. In fact, the board then went further, voting to make the same requirement of students at high school assemblies.

A local news outlet published a clumsy or erroneous headline that implied the Pledge had been dropped. The Fox team got wind of it, and next thing the Sioux Falls board knew, Megyn Kelly was on the air, sneering at the godless school authorities, essentially leading the braying Fox Nation into the inevitable two minutes hate. 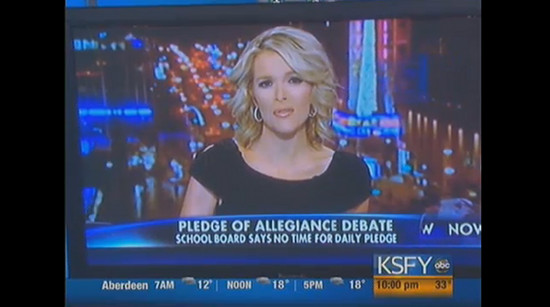 The irony is that the people who have reason to be upset by the school board’s actual decision — that’s you and me — haven’t raised the slightest stink. But we should, and we have every reason to. I don’t know exactly what language and method Alberty and his pro-Pledge brethren adopted to make Sioux Falls public-school students say the magic “patriotic” incantation from now on, but if the news video above is correct, schoolchildren will be “required” to say the Pledge.

That’s not just a bad idea, it’s illegal — and has been since the Supreme Court decided West Virginia State Board of Education v. Barnette, 70 years ago. While it’s not against the law for a district to make the Pledge a part of the school routine, students and faculty who wish to opt out have the dual right to remain seated and to decline to say the Pledge. In the Barnette case, the justices famously ruled, 6-3, that

If there is any fixed star in our constitutional constellation, it is that no official, high or petty, can prescribe what shall be orthodox in politics, nationalism, religion, or other matters of opinion or force citizens to confess by word or act their faith therein.

Legalities aside, I explained here why the Pledge should be retired, and why pupils being allowed to opt out doesn’t solve a key problem — especially not in elementary schools.

If Megyn Kelly wishes to once again drive the Fox mob into a frenzy, she now knows to whom to direct them (second entry). I hope Kent Alberty will at long last enjoy some peace and quiet.

November 22, 2013
Oklahoma House Speaker Adds a Chapel to the Blueprints of the Soon-To-Be-Renovated State Capitol Building
Next Post

November 22, 2013 When Charlatans Die, Is It Wrong to Criticize How They Lived?
Browse Our Archives
What Are Your Thoughts?leave a comment