Why is This Georgia Town’s Chief of Police Using the Department’s Facebook Page to Preach Christianity? November 20, 2013 Hemant Mehta

Why is This Georgia Town’s Chief of Police Using the Department’s Facebook Page to Preach Christianity?

It’s not strange at all that Harlem, Georgia Police Chief Gary Jones would use a Facebook page to keep citizens informed of local crime sprees, offer them some safety advice, and remind them of classes offered by the Harlem Dept. of Public Safety.

But it’s not hard to see how Jones crossed the line with this recent Facebook post (on the Department’s page):

There are many kids that have been raised in Godly homes that have went astray at no fault of the parent(s); however, too many have went astray due to parents failing to discipline and get involved in their children’s lives. The Police cannot raise your kids. Parents must become the disciplinarian and impose and enforce rules. The law does not prohibit a parent or guardian from spanking their children. The law says that parents may administer reasonable corporal punishment. No, it is not reasonable to strike a child with a bat or other object, but you can use a belt and strike their rear-ends. This may offend some parents that do not believe in spanking, and to you I say statistics are against you. Parents be nosy, check behind your kids and never assume that they will always be truthful. Doing these very things just may save the life of your child. Fathers you are the head of the home and God will hold you accountable. Get your children in church and teach them about the one and only true Saviour…Jesus Christ.

Apparently, Jones thinks that his government agency’s Facebook page is the appropriate place to offer his opinions on spanking and Jesus. As if we need another advocate for the kind of loving abuse featured in Michael and Debi Pearl‘s To Train Up a Child…

When a local news station asked him about the post, he replied, “I’m not ashamed of putting God into anything, and that’s just my opinion that that’s what’s wrong with this country today.”

It’s scary that the chief law enforcement official in the city is blissfully ignorant of how the law works.

Things only got worse after Jones got pushback. He told the station:

“I will continue to post and most of the people in Harlem are of Christian belief, and I’ve gotten a lot more support than people that don’t support it.”

Chief [J]ones says he plans to continue his posts, and he doesn’t make any apologies for anything he’s posted so far.

As if the majority’s religious preference should dictate whether or not the law should be followed.

Jones continued digging his hole on the Department’s Facebook page with a response to his previous post:

As expected, our most recent post regarding the diciplining of children and christianity has ruffled some feathers. Some folks are upset about me using the word God or Jesus Christ on a page that’s associated with the Harlem Department of Public Safety. This country was founded on the principles of God. We have allowed the government to remove him from the courtrooms, the schools and other places. I will lead this agency acknowledging Jesus Christ as my Savior. He guides my daily walk and directs me in the decisions that I make, to include those decisions made as a Department Head. I have never claimed to be perfect or sinless; however, I am proud to say that I need God in my life. This page does not necessarily reflect the same views or opinions of the City, but they are mine and I will continue to operate this agency with God first. Those that are of a different belief, to simply put it, don’t read our posts. I love you anyway. God Bless!

Oh, and by the way, if you needed to know what church to visit when you’re in Harlem, Jones has an opinion on that, too:

If anyone wants to be uplifted and hear a Great Man of God, come to Old Union Baptist Church in Harlem tonight at 7 PM. Dr. Frye will be preaching for our third night of Revival. Tomorrow night is the conclusion with the topic on the “Family”. Don’t miss out on this devine appointment. Come see what GOD has for you!

Let’s just do a full dump of religious posts, shall we? 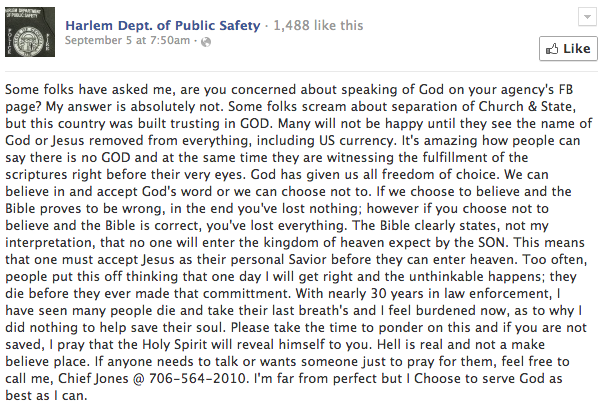 I wouldn’t care if these posts were made on Jones’ personal Facebook page, but this is very clearly the government agency’s page. Just check out the “About” page: 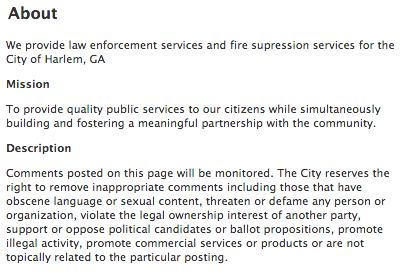 What Jones is doing is the equivalent of a public high school principal sending out religious messages on school stationery. No one cares about his personal beliefs or what motivates him to do his job. The one place he cannot proselytize and spread the words of Jesus is at work. No matter his intentions, he’s breaking the law.

Just think of what this must look like to non-Christians in the area. Do they worry Jones won’t protect them? Do they think he doesn’t care for them? Do they believe that, in a conflict between an atheist/Muslim/Jew and a Christian, he’ll automatically side with the Christian? I know I’d feel that way if I lived there.

Finally, if this is all happening on the agency’s Facebook page, how much worse must it be for the people who work under him every day?

The Freedom From Religion Foundation will be acting on this information shortly.

If Jones wants to keep his job, the solution is simple: Keep your religion to yourself. And if the city wants to avoid a lawsuit that it’ll undoubtedly lose, then the Director of Harlem’s Department of Public Safety David Sward needs to use some authority and force Jones to put an immediate halt to his Godly posts.

If anyone should know the importance of following the laws, even the ones you don’t like, it should be the chief of police. Unfortunately, Harlem is stuck with a leader who never even read past the first page of the Constitution.

November 20, 2013
Can Quora Be Inoculated from Pseudoscience?
Next Post

November 20, 2013 'Psychic' Sylvia Browne is Dead
Browse Our Archives
What Are Your Thoughts?leave a comment