You knew this was coming: The Christian group Liberty Counsel is crying foul after a video of President Obama reciting the Gettysburg Address surfaced without him including the words “Under God” in the speech: (Update: They took down the page, but you can still see it here.)

Not only did President Obama snub the ceremony for the 150th anniversary of the Gettysburg Address today, he ignored and omitted the words “under God” in his rendition of President Lincoln’s Gettysburg Address, filmed by documentary filmmaker Ken Burns.

Liberty Counsel, of course, isn’t a group that cares about the facts. They just enjoy playing victim even when there’s no controversy in sight.

As I explained earlier today, the original two drafts of the Gettysburg Address didn’t include the words “under God.” Those were only added in subsequent copies (which were auctioned off for charity purposes) written after Abraham Lincoln gave the speech.

If those facts weren’t enough, documentary filmmaker Ken Burns, who asked the President to make the video for his website LearnTheAddress.org, even states very clearly on the site that Obama was only asked to read the first draft (the “Nicolay Version”), which doesn’t include the “under God” phrase: 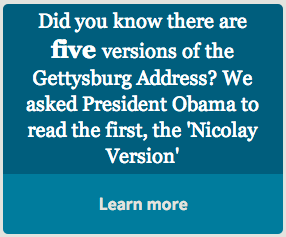 After five years of tearing down religious liberty, it is neither surprising nor unexpected that President Obama disregarded “under God” when reciting the Gettysburg Address. Today the “new birth of freedom” means taking a stand against a tyrannical, antireligious assault at every level of government from the Department of Justice, to city halls, to the public schools.

Please pray for a “new birth of freedom” in America!

No one’s tearing down religious liberty. Obama isn’t a tyrant nor is he anti-religious. And, most pertinent here, Obama didn’t “disregard” two words from the speech. He read the script he was given — the same one originally drafted by President Lincoln — and guess what? Lincoln didn’t include those words, either.

Not that Liberty Counsel will apologize. They’re too busy pretending to be martyrs for their faith.

(Update: I have replaced the original video with a mirror.)

November 19, 2013
Should Atheists Teach Their Children About Santa Claus?
Next Post