A Reminder That the Original Gettysburg Address Did Not Include the Words ‘Under God’ November 19, 2013 Hemant Mehta

Four score and seven years ago our fathers brought forth, upon this continent, a new nation, conceived in Liberty, and dedicated to the proposition that all men are created equal.

Now we are engaged in a great civil war, testing whether that nation, or any nation so conceived, and so dedicated, can long endure. We are met on a great battle-field of that war. We have come to dedicate a portion of that field, as a final resting-place for those who here gave their lives, that that nation might live. It is altogether fitting and proper that we should do this.

But, in a larger sense, we can not dedicate, we can not consecrate – we can not hallow — this ground. The brave men, living and dead, who struggled here, have consecrated it far above our poor power to add or detract. The world will little note, nor long remember what we say here, but it can never forget what they did here.

It is for us, the living, rather, to be dedicated here to the unfinished work which they who fought here, have, thus far, so nobly advanced. It is rather for us to be here dedicated to the great task remaining before us — that from these honored dead we take increased devotion to that cause for which they here gave the last full measure of devotion — that we here highly resolve that these dead shall not have died in vain — that this nation, under God, shall have a new birth of freedom — and that government of the people, by the people, for the people, shall not perish from the earth.

Just one problem with that. It’s not the original version of the speech.

Turns out the original two he drafted didn’t include the godly language: 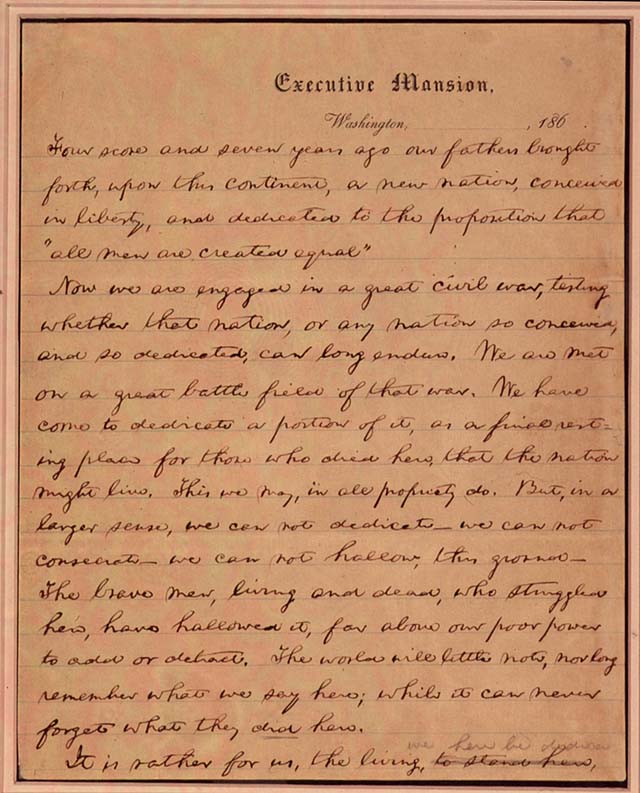 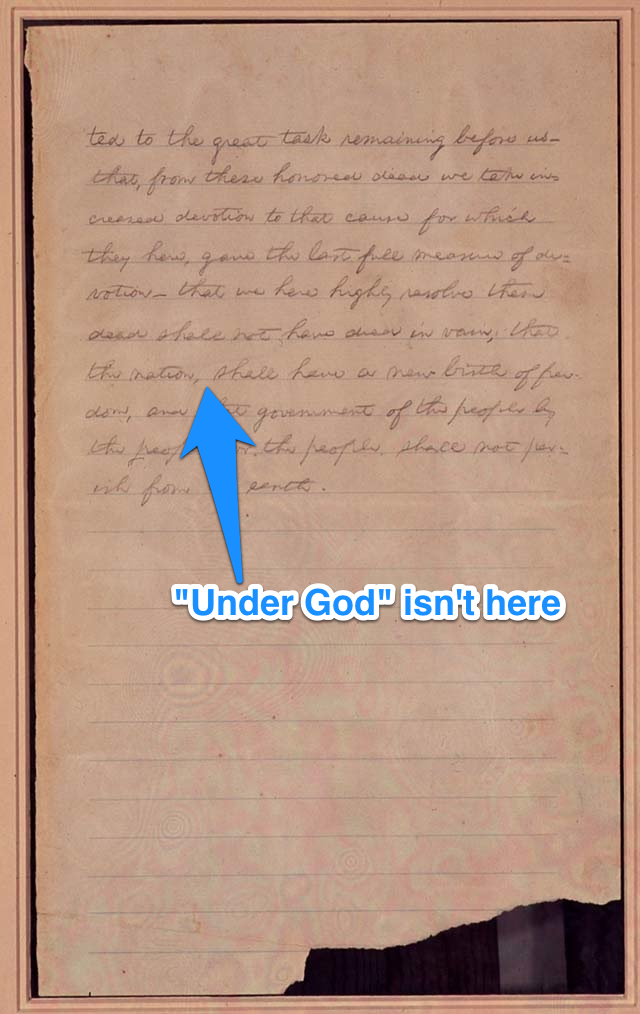 The Freedom From Religion Foundation explains the significance:

Perhaps Lincoln may have ad libbed “under God” in giving his famous address. If so, Lincoln again failed to include those words in writing out a second copy, known as the Hay version, because Lincoln gave it to his secretary John Hay as soon as he returned from Gettysburg. The second version is as godless as the first. This suggests Lincoln certainly didn’t think uniting our nation with deity was important.

It’s entirely appropriate that a “government of the people, by the people, for the people” leave divisive religion out of government, thus ensuring this nation “shall not perish from the Earth.”

Considering the divinely-inspired motives of the Confederacy, it’s not hard to believe that Lincoln, regardless of his personal beliefs, knew God could be invoked by anyone, even those using the idea to justify atrocities, and that leaving God out of his address was a deliberate move.