Should These Tennessee Campus Guards Have Been Protecting the Freelance Preacher … or the Paying Students? November 18, 2013 Terry Firma

Should These Tennessee Campus Guards Have Been Protecting the Freelance Preacher … or the Paying Students?

Last Thursday, a student at the University of Tennessee-Chattanooga found himself forced to the ground by four security officers for attempting to verbally engage a fire-and-brimstone campus preacher who is an outsider — not a student or a faculty member.

Angela Cummings, who’s been preaching for a dozen years, had been showing up at the campus for weeks, loudly calling the students “adulterers and adulteresses” (an odd charge to level at people who are, for the most part, unmarried). “Are you a child of God or a child of the devil?” she demanded to know.

Student Cole Philip Montalvo, who was riding a bicycle, was violently taken down and pepper-sprayed when he breached, by about a bike-length, a wide orange-coned circle on campus. The altercation happened after he addressed Cummings by advising her:

Here’s the video of the preacher’s (and the guards’) handiwork. The incident starts at 7:18. 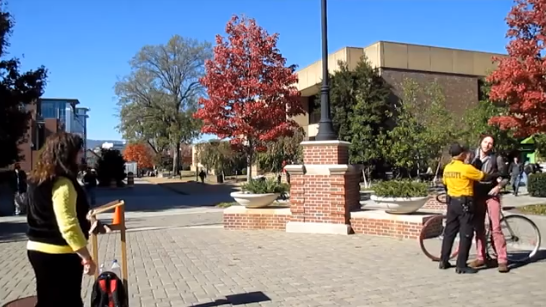 While it’s all going down, Cummings is heard to remind the students that she will be back every weekday, “unless there is a rapture.”

Montalvo, who administrators say wouldn’t listen to security officers’ requests to step back from the coned perimeter, faces charges for disorderly conduct, resisting arrest, obstruction of justice, and inciting a riot.

The university’s stance appears to be that there is nothing that could have been done differently. UTC Associate Vice Chancellor of Communication and Marketing Chuck Cantrell told the Huffington Post

“As a public campus, we are legally required to provide for the expression of diverse ideas on our campus. We believe that a college campus should be a place for free exchange of ideas and expressions. This individual had filled out the proper paperwork to appear and the person who was arrested was violating the procedure established by our campus police.”

The way the students see it, however, Cummings is so loud and obstreperous, she disturbs the peace and disrupts nearby classes. They are sick of the both the nature and the duration of her presence.

I can’t say I quite grasp the university’s course of action here. In what sense is the UTC campus “public”? In which specific ways are the administration’s hands tied when it comes to keeping this sort of outright nuisance away from one of the busiest parts of campus? If the university is committed to “the expression of diverse ideas,” why may those ideas not be politely challenged, as Montalvo did? Is it reasonable to give an incoherent, clamorous ranter like Cummings a platform day in day out, week after week, and to protect her with brute, student-financed force from anyone who dares come within 20 feet of her?

Not having gone to college in the U.S., I’m honestly stumped. Can anyone help me understand?

November 18, 2013
A One-Time Catholic Priest Argues That the Celibacy Requirement is 'Destructive'
Next Post