On Second Thought, Watauga Schools Will Take ‘In God We Trust’ Posters After All — As a Tool to Teach History November 18, 2013 Terry Firma

On Second Thought, Watauga Schools Will Take ‘In God We Trust’ Posters After All — As a Tool to Teach History

As regular readers of this site may remember, the posters in question are framed photos of an American flag with the motto “In God We Trust” superimposed on it. They are being offered by American Legion Post 130. 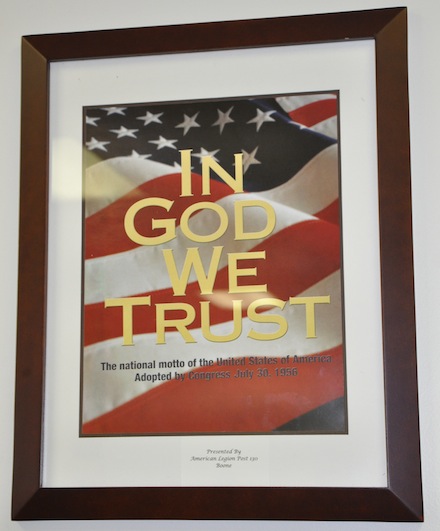 The placards are now welcome in the public schools after all. Why the yo-yo-ing?

The school system [in Watauga County] originally rejected the gifts on the advice of attorneys … that the posters could be construed as a promotion of religion. …

[But] Interim Superintendent David Fonseca said this week that the school system will accept the gifts after considering N.C. General Statute 115C-81(g)(3a). The statute says school boards shall “allow and encourage” the reading or posting of documents reflecting U.S. history, such as the Declaration of Independence, the Pledge of Allegiance, and the national motto. “Local boards, superintendents, principals and supervisors shall not allow content-based censorship of American history in the public schools of this state, including religious references in these writings, documents, and records,” the statute says.

Ah. It’s totally not about the promotion of religion, you see — however did you get that idea? It’s about teaching kids history.

How far back do you reckon Watauga kids will be encouraged to go in their mastery of historical facts? Congress didn’t pick “In God We Trust” as a national motto until 1956, at the height of the Cold War. If the American Legion consists of such committed history buffs, who wish to impart historical facts to captive schoolchildren, how about they present posters with the beautiful motto E Pluribus Unum, in official use in the U.S. since 1782? There’s nothing historical about “In God We Trust” that isn’t roughly four times historical-er* about E Pluribus Unum (“Out of Many, One”).

The obvious explanation is that E Pluribus Unum wisely includes all Americans, and American Legion chapters now put much time and effort into religious advocacy, seeking to paint non-theists as less-than-patriotic outsiders.

The most remarkable reaction I’ve seen — a physical threat wrapped in velvet — came from “In God We Trust” supporter Keith Honeycutt, who wrote:

What day and time will the NAACP and all the rest of the socialist suits show up with the lawsuits? I am sure there are several folks that would like to say hello to them and escort them right back out the way they came in.

I’m not certain why Honeycutt would see an organization of African-Americans — whose unofficial hero is the most famous U.S. reverend who ever lived — as hostile to religion. Perhaps Honeycutt committed a (Freudian) slip of the pen, and he meant to refer to the ACLU. Even so, especially for a controversy in a Southern state, the comment is a bit chilling.

November 18, 2013
BBC Criticizes U.S. Christians Who May be Playing Hanky-Panky With Martyr Statistics
Next Post