So How Badly Do Christians Tip, Anyway? November 17, 2013 Terry Firma

So How Badly Do Christians Tip, Anyway?

This year, the phenomenon of restaurant customers writing aggressive, even hateful “Christian” messages on credit card receipts in lieu of a tip seems to have reached, well, a tipping point. We’ve also seen that it’s common in some circles to leave, rather than a gratuity, a fake ten-dollar bill with a Bible verse printed on the back. And a few years ago, we got reports that some Christians who go out to dine on Sunday tell the wait staff they won’t tip … because they don’t approve of people working on the Christian Sabbath. 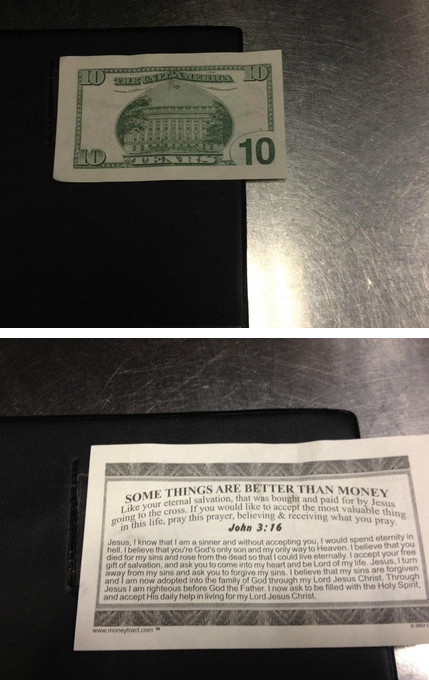 How did it get like this? Maybe there’s some copy-catting going on here; bad behavior can be contagious. Perhaps it was always this widespread, and the prevalence of camera phones and social media just makes this kind of douchebaggery more visible.

Before I dive a little deeper, I guess it’s time to toss in my own story about Christian tipping here.

These days, while I still have one foot in the world of journalism, I make most of my money as a photographer, and most of that comes from weddings. I don’t expect tips (my clients pay me well, and I own the business, so there’s no need to tip me), but occasionally a couple slips me a handful of bills or a check anyway, from $50 to $500. I split it with my assistant.

This past summer I had a lovely bride and groom who, on the day itself, raved about my hard work, my creativity, and about the photos I showed them on the back of my cameras. When I left at the end of the evening, they wanted to give me a “generous tip” (their words), but the groom couldn’t immediately find his wallet. I waved them off — “that’s really not necessary” — but they insisted, and assured me that they would send me a sizable gratuity right after the honeymoon.

Four or five weeks later, I was reduced to asking them by e-mail whether they’d sent it. Awkward, for sure, but I wanted to make sure it hadn’t been lost or stolen in the mail, and I knew my assistant could use the extra cash. They replied that they’d just switched banks and addresses but hadn’t forgotten about me.

And then they did, apparently, because that was the last I heard from them, except for an e-mail saying they adored their photos.

What does this have to do with Christianity? Probably nothing. I should note that theirs was the only church wedding I photographed in 2013, though.

All of this proves nothing. The evidence is entirely anecdotal. Sure, you can find many comments about Christians allegedly being poor tippers (for instance, here and here), but that still doesn’t mean we have any data that approach statistical relevance.

So I went looking to see if there’s actual research on this topic.

Turns out, there is. 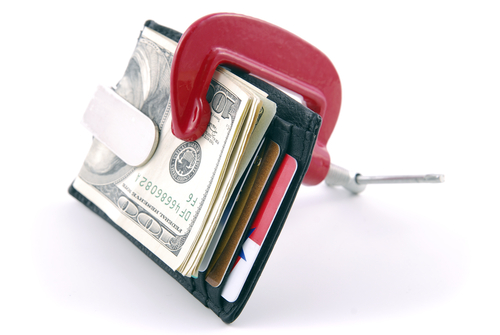 In 2010, Michael Lynn of Cornell University and Benjamin Katz of HCD Research did a study on God belief and tipping, using a sample size of 1,600 Americans. Their findings were published in the Journal of Applied Social Psychology. You can read the study here (PDF).

[Lynn] found that Christians are not in fact bad tippers; they gave an average of 17.3% for good service, well inside the 15% to 20% norm.

The researchers also found that the Northeastern United States, which has a relatively large demographic of non-believers and the religiously unaffiliated, is the country’s most generous region when it comes to tipping.

Lynn notes that there are likely reasons for these facts — some of them, in Christian tippers’ own minds, lessening the stigma of being stingy.

(1) [Christians] may donate money to charity or do other good deeds that they feel gives them a license to tip less;

(2) they may perceive service workers (especially those who work on religious days) as outsiders who are undeserving of generosity;

(3) they may be less informed about or concerned with secular issues like tipping; and/or

(4) they may have more authoritarian and punitive personalities that lead them to assess service more harshly, and to tip less as a result.

The Cornell study shouldn’t be the final word on the subject (a fact the authors acknowledge by mentioning multiple caveats which I recommend you read — see pages 12 through 15 of their report), but it offers a useful glimpse into a complicated subject.

If I may see-saw back to the anecdotal for a minute, I was struck by this public confession from Justin Wise, who runs a Lutheran ministry in Des Moines, Iowa. Wise says bluntly that Christians are “notorious” for being terrible tippers.

It’s true. Christians don’t tip very well. As a matter of fact, we’re pretty cheap. What makes this worse is that we paint ‘cheap’ with a religious-sounding veneer and call it ‘being a good steward.’ Nothing like hiding behind the Bible to camouflage your stinginess.

He mentions that he’s aware that a lot of waiters don’t like to work Sunday brunch, as they feel they often get stiffed on tips by the post-sermon Christian crowd.

Weird. It’s almost as if those sermons and all that Bible-reading aren’t having the intended effect.

But again, we ought to keep in mind that “stingy” and “Christian” aren’t necessarily two sides of the same coin at all. The Christians in my life (such as my evangelical in-laws, and my buddy Ben, a preacher and theologist) are among the most generous people I’ve met. But if I were a waiter, I’d have solid reasons to view the arrival of a church van full of customers with some trepidation; and, according to the Cornell study, to greet the arrival of Jews and non-theists with high hopes.

November 17, 2013
Pennsylvania Legislator Proposes Resolution to Celebrate Addition of 'Under God' in the Pledge of Allegiance
Next Post