On the afternoon of Wednesday, November 20th, Illinois Governor Pat Quinn is expected to sign a law granting same-sex couples the right to legally marry.

So naturally, Roman Catholic Bishop Thomas Paprocki has made plans to lead a rite of exorcism “in reparation for the sin of same-sex marriage” just after the legislation is enacted. Clergy and laity alike are invited to participate.

As many of us know (albeit more through Hollywood’s intervention than the Catechism’s), an exorcism is a rite designed to drive out demonic evil by invoking the power of God. Typically, exorcism is used to rid a person of demonic interference, but an appendix to the 2004 Latin Rite of Exorcism notes that demonic presence can also be expressed by “the penetration of things and places in a certain manner” or through “various forms of opposition to and persecution of the Church.” Paprocki argues that an exorcism is appropriate in this case because same-sex marriage is a demonic deception that runs counter to Catholic teachings.

He justifies this belief in a diocesan press release by citing the words of Pope Francis himself, in his recent former persona as Cardinal Jorge Maria Bergoglio. Paprocki quotes a letter Bergoglio sent in 2010 urging contemplative religious in four Argentine monasteries to pray against the enaction of legislation that would give gay couples the right to marry and adopt children:

At stake is the total rejection of God’s law engraved in our hearts… Let us not be naïve: it is not a simple political struggle; it is an intention [which is] destructive of the plan of God. It is not a mere legislative project (this is a mere instrument), but rather a ‘move’ of the father of lies who wishes to confuse and deceive the children of God.

Paprocki goes on to add context from a Biblical perspective:

Therefore, he argues, an exorcism is an entirely appropriate response.

Paprocki argues that, while those who involve themselves in same-sex relationships are certainly guilty of grave sin, legislators who allowed and enabled this law to come into being must be seen as “morally complicit”, and calls on them to “pray for deliverance” as well as to work to get the law repealed:

It is scandalous that so many Catholic politicians are responsible for enabling the passage of this legislation and even twisting the words of the pope to rationalize their actions despite the clear teaching of the Church. All politicians now have the moral obligation to work for the repeal of this sinful and objectionable legislation. We must pray for deliverance from this evil which as penetrated our state and our church. 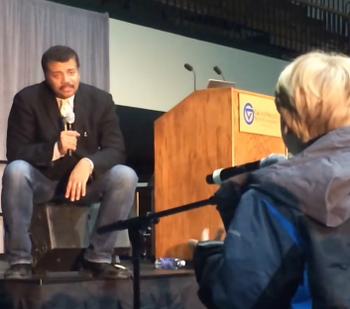 November 16, 2013
You Have to Watch Neil deGrasse Tyson's Conversation with an Intelligent 9-Year-Old
Next Post