Pastor John Hagee has a habit of railing against things he really doesn’t understand. Like the Harry Potter series and Ouija boards and rock music.

In a sermon delivered last weekend, Hagee explained how atheism is intellectually and morally bankrupt… and that it has never cured a disease (implying, strangely, that “Christianity” can): 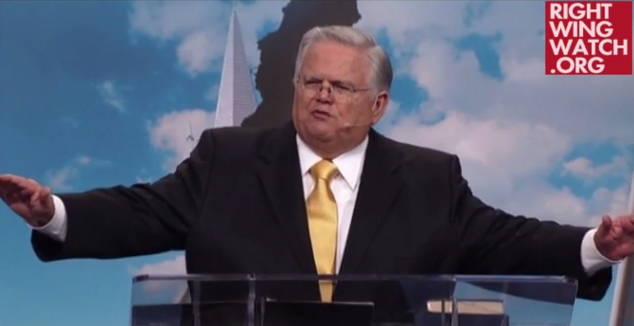 Actually, atheists don’t all say “There is no God”… but nuance is lost on this man. Atheism may not have painted a masterpiece, but atheists have.

Atheism may not have healed a disease, but there’s no shortage of brilliant atheist scientists and researchers.

Atheists everywhere can tell you how much peace of mind they have knowing there’s no hell awaiting them or vengeance-seeking God watching them at all times.

Atheism — or rather, a naturalistic worldview — is the only philosophy that has given us an intellectual answer for how we got here.

As usual, Hagee is wrong.

But he wasn’t done yet:

It is believed that when people stop believing in God, they believe nothing. That’s wrong. When people no longer believe in God, they will believe in anything. That’s why they start hugging trees. That’s why they start staring into crystals, joining cults, running into the woods, ripping off their shirts, baying at the moon, because it’s something intellectual people do when they get frustrated.

Since when it there something wrong with caring about the environment? (Then again, I guess you can stop caring about it if you think it’s all gonna burn, anyway, when Jesus returns.)

Staring into crystals? Most atheists eschew and call out all forms of supernatural bullshit, not just the kind pastors talk about.

Joining cults? That’s pretty much the exact opposite of what we do.

Running into the woods, ripping off our shirts, and baying at the moon? Does Hagee think all atheists are half-human, half-stripper, half-wolf?

After hearing that last bit, you have to believe, as Kyle Mantyla of Right Wing Watch does, that “Hagee has probably never actually met an atheist.”

Not that that will stop him from pretending to be an expert on us. Lying to people about subjects he knows next to nothing about is pretty much what he does for a living.

November 15, 2013 How to Get Rid of Religious Proselytizers in One Easy Step
Browse Our Archives
What Are Your Thoughts?leave a comment