Pat Robertson: When Your Son Comes Out as Gay, Ask If He’s Been Molested November 14, 2013 Camille Beredjick

Pat Robertson: When Your Son Comes Out as Gay, Ask If He’s Been Molested

Conservative pundit Pat Robertson this week had shocking words for a mother who wrote to him distressed because her 16-year-old son had just come out as gay. First reported by Right Wing Watch, on an episode of “The 700 Club,” Robertson suggested that the parent of a gay son should try to find out if her child was gay due to molestation. 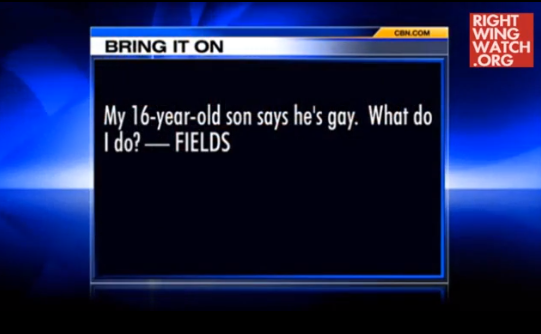 Robertson answers the woman’s question by essentially suggesting that her son is gay because he was sexually abused, one of the most common — and most harmful — myths perpetuated about LGBT youth by anti-gay religious extremists.

“Is there a biological thing going on or has he been influenced — has a coach molested him?” Robertson asked the viewer. Of the LGBT youth community as a whole, he noted: “They don’t know what they’re doing, they’re teenagers.”

He then advises the woman to try to understand what her son was going through and to “talk to him and counsel him,” presumably until he’s “fixed” and no longer thinks he’s gay.

Robertson’s anti-gay antics are not new, of course. He was named “Bigot of the Year” last week in London at the Stonewall Awards, a 500-person ceremony honoring those who have supported Britain’s LGBT community. The Daily Mail explains:

US TV evangelist Pat Robertson was named Bigot of the Year — the award reserved for an individual who has gratuitously caused hurt and offence to gay people around the world. Robertson hit headlines in August by saying that gay men viciously spread HIV when shaking hands by using ‘special rings’.

In addition, Robertson has previously claimed that LGBT nondiscrimination ordinances will put Christians in jail, and stated that gays are just straight people who have “forsaken God.”

Thanks for the great advice, Pat! I’m not sure why this man is still allowed on television, but I’m pretty sure we need to amp up the number of awards ceremonies that point out what a terrible person he is.

November 14, 2013
A Christian Homeless Shelter in Kansas City Rejected Atheist Volunteers, but Others Are Extending an Invitation
Next Post

November 15, 2013 Apply for the 2014 American Atheists Scholarship!
Browse Our Archives
What Are Your Thoughts?leave a comment