You know what would look good at the foot of my Festivus pole?

This limited-edition dark-chocolate Jesus-on-a-cross, sprinkled with sea salt — a new project on Kickstarter: 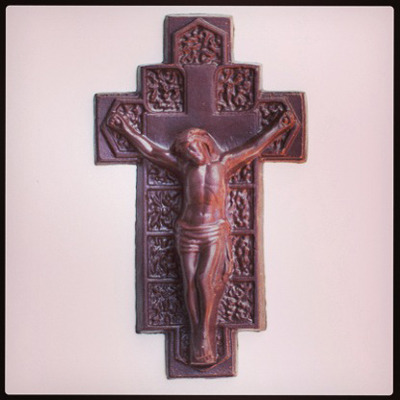 To be fair, the idea isn’t entirely new. Tom Waits, on 1999’s Mule Variations, sings of visiting a (possibly fictional) candy store and buying a chocolate Jesus — the only treat that, he rasps reverently, can satisfy his soul.

And in 2005, Italian-Canadian sculptor Cosimo Cavallaro crafted a life-size chocolate Jesus that had Catholic League blowhard Bill Donohue seeing red. Donohue told Cavallaro that the artwork was “one of the worst assaults on Christian sensibilities ever,” and added, “You’re lucky I’m not like the Taliban, because you would lose more than your head.”

Speaking of losing one’s head, the face of Cavallaro’s 200-pound Christ confection got partially eaten by rats when the sculpture was stored in a Brooklyn warehouse for a while. Pretty sure those rats went straight to hell, though.

November 13, 2013
Chicagoland Atheists Will Be Volunteering Next Weekend
Next Post

November 14, 2013 San Diego Museum Council Denies Membership to Local Creation Museum, Angering Its President
Browse Our Archives
What Are Your Thoughts?leave a comment