East Point Academy is a charter elementary school in West Columbia, South Carolina where, for the third year in a row, teachers and administrators were encouraging students to participate in Operation Christmas Child — a program where students could donate toys to impoverished kids overseas.

Just one catch: Operation Christmas Child is run by the group Samaritan’s Purse and the boxes of toys they give to those impoverished children each come with a pamphlet designed to convert them to Christianity, pledge card and all: 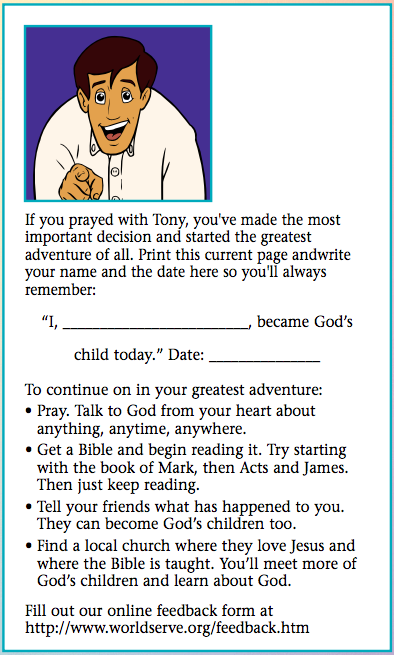 On Monday, the American Humanist Association’s Appignani Humanist Legal Center sent the school’s administrators a letter telling them to stop their faith-based outreach:

The boxes of toys are essentially a bribe, expressly used to pressure desperately poor children living in developing countries to convert to Christianity, and are delivered with prayers, sermons, evangelical tracts and pressure to convert. While a private religious group is free to pursue such a goal, even through such questionable means, a public school cannot affiliate itself with, endorse, promote or support such a group’s program without violating the Establishment Clause.

In addition to having a religious purpose, the plain effect of Operation Christmas Child is to endorse and promote religion. The school is in effect urging students to make an in-kind contribution, as well as for their parents to make a monetary one, to Samaritan Purse’s conversion efforts. Moreover, the school is plainly sending the message to young school children that the Christianity at the core of Operation Christmas Child is “stamped with [the] school’s seal of approval.”

The letter had the intended effect — yesterday, Principal Renee Mathews responded (indirectly) to the AHA, making them aware of a letter she sent out to all the parents (emphasis hers):

At our school only non-religious items have been collected for the boxes, no religious material is distributed to students or included with the boxes and the school has expended no money for the shipping of the boxes which each voluntary participant paid. No incentives or grades are given for any community service projects. Having said all of this, since we are just receiving this notice at this late date and the project ends Friday, we have very little time to seek legal advice. Therefore, in an abundance of caution because we do not want to expend school financial resources defending a lawsuit, we are not going to accept Operation Christmas Child boxes. If you and your child had planned to donate a shoebox of supplies, you are encouraged to find a charity of your choice for the gift. A reminder that Toys for Tots will continue until December 10 so you are encouraged to participate. Thank you for your support.

Even if the boxes from the students were non-religious in nature, by going through an explicitly Christian charity, there was an implicit endorsement of its religious beliefs. If a lawsuit were filed, the school would’ve been on the losing end of it.

What makes me especially upset — even though I’m glad the partnership has ended — is how Mathews casts the AHA as the bad guys here. Note how she says the school is ending the program “in an abundance of caution” because they couldn’t pay to fight a lawsuit. It’s like she really wanted to say, “We would totally continue this program if it wasn’t for that evil group that takes the ‘law’ seriously. Blame them, not us!”

Elsewhere in her letter is an admission that “many public schools in SC and across the United States participate in Operation Christmas Child.” As if everyone doing something illegal makes it okay for them to do something illegal. It’s very possible that other schools participate in OCC. But it takes a brave parent or students to come forward about it before a group like the AHA (or the Freedom From Religion Foundation) can act.

That’s what happened at East Point Academy. A parent notified the AHA of the constitutional violation. The identity was protected, the AHA sent its letter, and the school stopped the endorsement of Christianity. It’s just that easy.

If other parents at other school districts did the same thing, the program would stop at their schools, too, diverting the generosity and goodwill of the families to secular charities that care more about helping people than converting them.

November 14, 2013
Is the Italian Mob Trying to Assassinate Pope Francis?
Next Post