Be Careful What You Wish For: UK to Crack Down on Street Preachers and Other People Deemed ‘Annoying’ November 12, 2013 Terry Firma

Be Careful What You Wish For: UK to Crack Down on Street Preachers and Other People Deemed ‘Annoying’

Fifteen years ago, tired of yobs and hooligans and a perceived decline in civility, British prime minister Tony Blair and his New Labour cabinet cooked up a nasty little legal concoction. It’s called an ASBO. The acronym stands for Anti Social Behavior Order.

These civil orders were designed to be issued to people whose unpleasant behavior was not otherwise (easily) prosecutable under U.K. law. And as long as we’re talking about things like vandalism and public urination, no argument here. 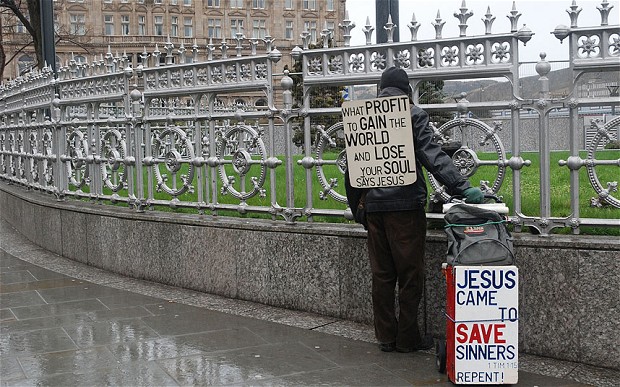 But soon, British police and magistrates were handing out ASBOs for virtually every behavior that someone, somewhere, disliked, including public cursing, loitering, using (allegedly) racist language, and “being rude to members of the public.” The standard for issuing an ASBO was astonishingly low from the start: anyone thought to be causing “harassment, alarm or distress” could find himself on the wrong end of one.

Inevitably, I suppose, ASBOs have been issued to operators of soup trucks servicing the homeless (because the clients were observed to litter), and to an 87-year-old man whose judicial order specified that he was no longer allowed, on penalty of prison, to be “sarcastic” to his neighbors. (One of the problems with ASBOs is that if you break them, you can be jailed. A 20-something homeless man in Birmingham, having repeatedly broken his ASBO against begging, was sentenced to a total of five years behind bars for an offense that itself is non-imprisonable).

Perhaps the most peculiar ASBO I’m aware of was given to Leroy Trought, a Bristol bar owner who turned an adjoining area into a parking lot that he called, with a public sign, the Porking Yard, a reference to a century-old butcher shop across the street. A magistrate, mindful that local mosque-goers might find the reference to pork offensive, ordered Trought to change the wording of the “porking yard” sign to “parking yard.”

Now, I have both good and bad news to share. ASBOs, which dispense justice in such a slapdash, arbitrary way, may be on the way out. But that’s no cause for celebration, considering what likely comes next. According to the Telegraph,

ASBOs are to be scrapped and replaced with wide-ranging new orders known as IPNAs (Injunctions to Prevent Nuisance and Annoyance). They are designed to be easier to obtain, require a lower evidential threshold and yet cover a wider range of behaviour. …

Before an ASBO could be issued, a court has to be satisfied that someone had at least caused or threaten to cause “harassment, alarm or distress” to someone else, and the order was “necessary” to protect the victim. But the new system will allow courts to impose sweeping curbs on people’s liberty if they think they are “capable of causing nuisance or annoyance to any person”. They will be able to impose them if they think it is “just and convenient” to do so.

What that means is that

… preachers, buskers and peaceful protesters could effectively be driven off the streets. … [T]he new powers could [also] be used against charity collectors or even carol singers.

A group called the Christian Institute is involved in the brawl over the new proposal, as are many secular organizations. An Institute spokesperson said:

“Of course political demonstrations, street performers and corner preachers may be ‘annoying’ to some — they may even, from time to time be a ‘nuisance’. The danger in this bill is that it potentially empowers state interference against such activities in the face of shockingly low safeguards.”

Another campaigner against the British proposal added:

“This is a crazy law. It will not deter thugs and hooligans who are already breaking lots of other laws anyway. But it will give massive power to the authorities to seek court orders to silence people guilty of nothing more than breaching political correctness or social etiquette.”

Street preachers have as much right to publicly spout their opinions as anyone. I’d be happy to see them slink away, never to emerge again, but I most definitely don’t want them to scram as the result of any kind of government coercion. What the state can do to them, it can do to all of us.

ASBOs and IPNAs deserve to die — to be replaced by nothing but the public’s acceptance that in a free and grown-up country, no one has the state-sponsored right not to be offended by ‘annoying’ forms of expression.

(photo via the Telegraph)

November 12, 2013
Can You Hate Religion but Love Jesus?
Next Post