Ah, sex ed. There are few high school subjects that can make teenagers so uncomfortable, weirdly excited, and sweaty all at once.

One student, Jeremy, was having a tricky time in his own sex ed class and so he did what any of us might have done in a similar position: he emailed Christian blogger Matt Walsh for some advice. 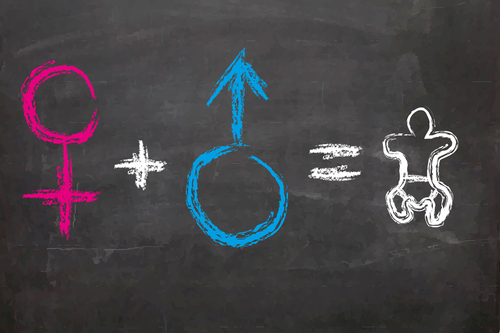 A few things you should know about Matt Walsh:

So, as I was saying, Jeremy had a bad experience in his sex ed class and turned to Walsh for some guidance:

Yesterday my health teacher was talking about safe sex and someone mentioned abstinence and she said it wasn’t realistic. She said it was an out dated way of thinking and the people who push for it are out of touch because they were probably kids a long time ago. She said sometimes sex can be more casual and isn’t always a part of something serious. Then she asked how many people in the class are sexually active because she said it was important for people not to be ashamed. Almost all the guys in class raised their hands but I didn’t. They were all talking about how sex doesn’t have to be something for marriage or long term relationships. I always wanted to wait for marriage and I hope it’s not weird for me to say that. They said in class that we should be more accepting of sexual expression that doesn’t conform to older ideas. But I still always wanted to wait for marriage. But at this point I feel like an outcast or something.

Let’s get the initial response out of the way. I obviously don’t support abstinence-only sex education, but I can’t overstate how inappropriate it would be for a teacher to ask her students whether or not they are sexually active in front of the whole class. It would also be inappropriate for her to tell students what sex should mean to them. (This is all assuming the scenario actually happened as stated.)

But I digress, because this is really about Walsh’s response. Walsh’s incredibly, incredibly long response. So let’s dive right in.

Jeremy wrapped up his letter asking a kind of heartbreaking question:

Am I weird for not really wanting to go out and hook up with girls and stuff and instead wait for marriage?

Walsh kicked off his diatribe with a pretty stealthy “gotcha!” moment:

Yes, it’s weird for you to want to wait until marriage. In spite of the hyper-sexualization of our culture; in spite of society’s decaying moral sensibility; in spite of all of the messages that bombard you every day through every available medium; in spite of the pressure from your classmates; in spite of the bullying from that fool of a “health teacher,” you STILL stand tall and resolve to save yourself for your future wife.

Man, that is weird. It’s also awesome, inspiring, courageous, and extraordinary. Not to mention, Jeremy, you’re doing the RIGHT thing. You’ve got more character than most adults in this country, and you should be commended for it.

See what he did there, guys? He took “weird” and turned it right around on its head!

(I have to say, I will never feel comfortable hearing people talk about the hypothetical “future” spouse of a kid as if it’s a given.)

Speaking of adults without character, please ignore everything your “health teacher” says on this subject. I have to put quotes around her title because it doesn’t sound like she’s doing much in the way of teaching, and whatever she’s blabbering about has very little to do with “health.” She seems to think there’s a “safe” way for emotionally immature juveniles to have casual sex.Maybe she’ll follow up this performance by advocating “safe drunk driving.”

Well… yeah, there is a safer way to have casual sex. Teen birth rates are at historical lows due to teens taking better birth control measures.

But forget the facts. Walsh is on a roll. He talked about how mad Jeremy’s letter made him, and then ripped on the health teacher a little more for good measure:

So, Mrs. Health Teacher has singlehandedly declared sexual morality dead, has she? With one scoff and wave of her wand she’s buried thousands of years of insight into the topic? Anyone who advocates such things must be “old” and “out dated”?

Hmmm. Well, this tattooed 27 year old former DJ happens to be on your side, man.

Really? This “thousands of years of insight” on the topic of morality that he speaks of — Does he think that residents of Mesopotamia in 500 B.C. weren’t having sex before marriage? Does he think marriage as an institution was exactly the same back then as it is today?

Well, this pierced-eared, 28-year-old former waitress happens to think you’re pretty naive. (Also: Walsh should learn that “single-handedly” is hyphenated, as is “27-year-old.”)

God forgive me, I’m not old fashioned at all. I don’t think you are, either. Truth only seems old fashioned nowadays because we’ve grown so accustomed to deceit and manipulation. But Truth is eternal, so it can never be old or new. It never ‘was’ or ‘will be.’ It just ‘is.’ It always ‘is.’ Truth never grows old, and if you believe in it and try to live by it, you will always be, in some ways — the only ways that matter — the youngest, freshest, most energetic rebel on the block.

Truth is capitalized, y’all. This shit is getting real. Or “fresh,” if you will.

So here’s the point, Jeremy:

(500 words into the post, and we’re finally coming around to a point. Buckle up, everyone.)

You could ask any married person who slept with other people before meeting their spouse (I wouldn’t recommend actually asking this, I’m just trying to illustrate a point here): are you happy about it? Are you glad that you gave yourself to someone other than the person you now love eternally? If you could go back to those times, would you stop yourself?

Was it worth it?

Really, was it worth it?

Do you wish you could say that your spouse is the only person who has experienced these intimate, sacred moments with you? Are you proud that there are other men or women in the world who have seen this side of you? Are you satisfied that what you give to your spouse is now secondhand?

OK, Walsh, you may think that our society’s focus on sex is terrible, but I am beyond disturbed by the fact that you think the most important part of a marriage is that both parties are in some way “pure” going into the situation.

Secondhand? How off-putting is this idea that sex is but this one little, shiny thing that becomes icky and tainted if it is experienced with more than one partner?

And while it may not be insanely unrealistic for a person to wait until they get married to have sex, it’s certainly a reason that some young people choose to get married before they’re ready. Do we, collectively, think that 19-year-olds can’t pick a sexual partner and be safe about it, but they can decide to spend the rest of their lives with another person? And that’s the reasonable decision?

If they tell you they feel happy or neutral about the fact that they gave themselves to someone other than their spouse, you’re dealing with someone in a very dysfunctional marriage. Any honest person in a healthy relationship would tell you they’d erase those moments from their lives if they could.

They can’t, of course. Nobody can. We can’t live in the past and harp on our mistakes, but this all leads to an important point: the myth of “casual sex” persists, even though many of us — millions and millions — have seen it for what it is. Marriage as an institution is in rough shape, but people still do get married in this country. That means millions have had to look at their spouse and say — probably silently in their own heads, deep in their subconscious — “I have nothing new to give to you.”

What does that even mean?! I have nothing new to give you, life partner? Not a commitment to spend my life with you? Not the experience of going through all of life’s trials and tribulations with you? Not the experience of having and raising kids? Nothing?! If I had sex with a single person before my spouse, screw it all, I guess. Nothing new to see here.

There is a lot more he has to say, and it may be worth skimming if you want to spark a rage headache, but let me skip ahead to an awesome part:

We’re told that we are sexually “liberated” if we throw ourselves at strangers and give ourselves over to people who couldn’t possibly care less about us. This is yet another lie. If modern attitudes about sex have “liberated” us, what, precisely, have we been freed from? Security? Commitment? Trust? What, we’ve broken the Shackles of Purity and Love and run gleefully into the Meadows of Pornography and Herpes?

I’ve written nearly 200 posts for this blog, and not a single thing I’ve ever said has come even remotely close to being as awesome as “Meadows of Pornography and Herpes.”

Holy cow. This is getting dark. “Emotionally desperate”? “Psychologically battered”? It sounds like some horrifying, dystopian future from an Aldous Huxley novel. Which, in Walsh’s mind, may be true.

So, blah, blah, skippy, skippy — casual sex is a farce, sex shouldn’t be casual, causal sex cheapens the act, other stuff in all caps, etc.

Walsh wraps up his letter with an encouraging:

You’re on the right path. You’re a rebel. Keep going.

Let’s hope none of you are considering making your own, individual life choices if they don’t jibe with Walsh’s. Because if you are, you’re screwing yourself over, along with — let’s face it — everyone you’ve ever loved.

(via @StuffCCLikes. Image via Shutterstock)

November 10, 2013
To Shirk Its Financial Obligations, a Powerful Pennsylvania Church Railroaded a Contractor With False Charges
Next Post