Last week, the Penn Secular Society put up an awesome display on the main part of campus. It was a “partial list” of all the gods people don’t believe in with a handwritten sign on the far right (it’s hard to see below) reading, “So what’s one more?” 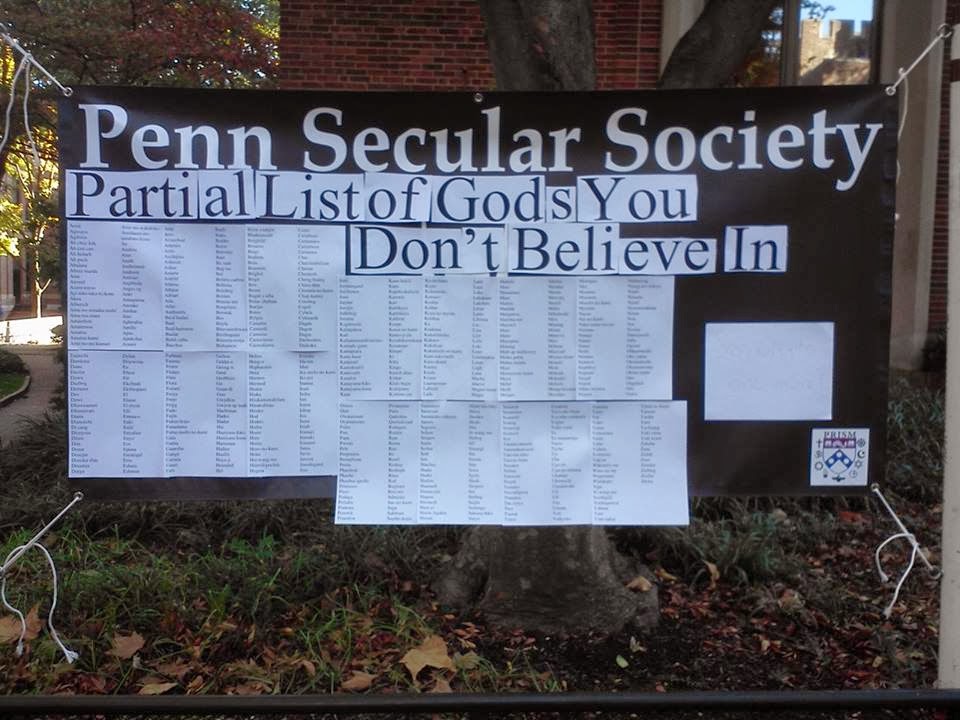 Within a couple of days, one of the pages had been ripped down and coffee had been thrown on the middle of the display: 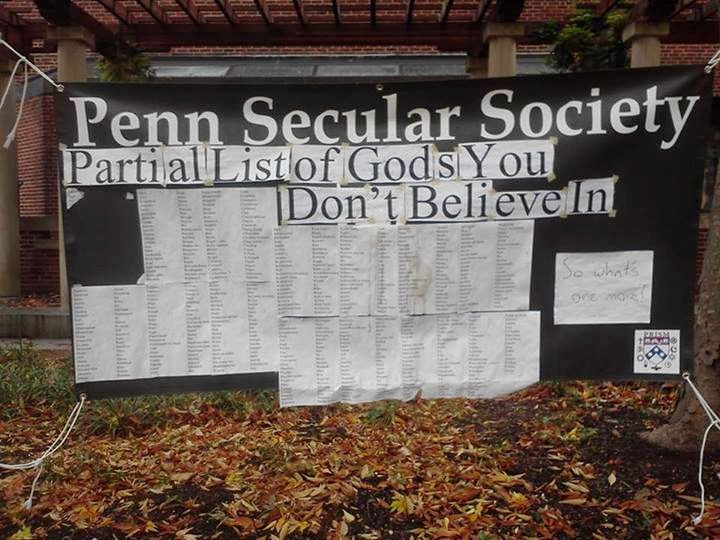 But let’s be honest: If vandalism ever stopped campus atheist groups, there would be no campus atheist groups. So they set up a new display, this time focusing on indefensible lines from the Bible — with two signs on the right reading, “Do you like this display? Please don’t deface our banner — find us on Facebook and tell us why.” 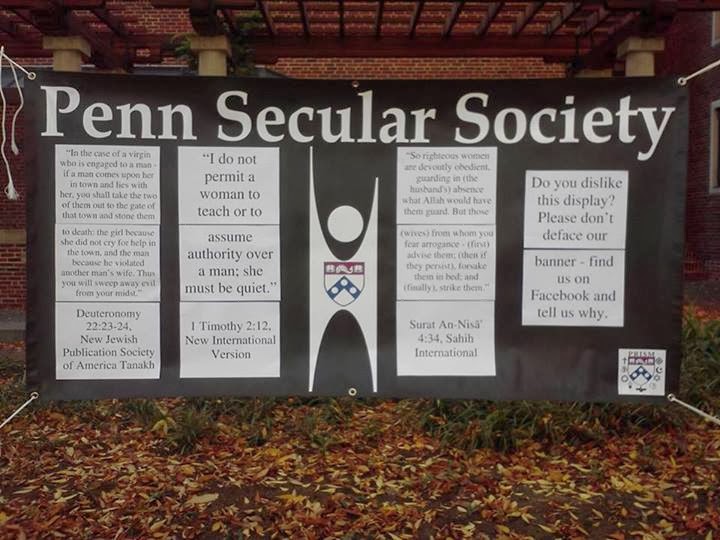 Five hours after going up, that display featured the remains of a can of soup: 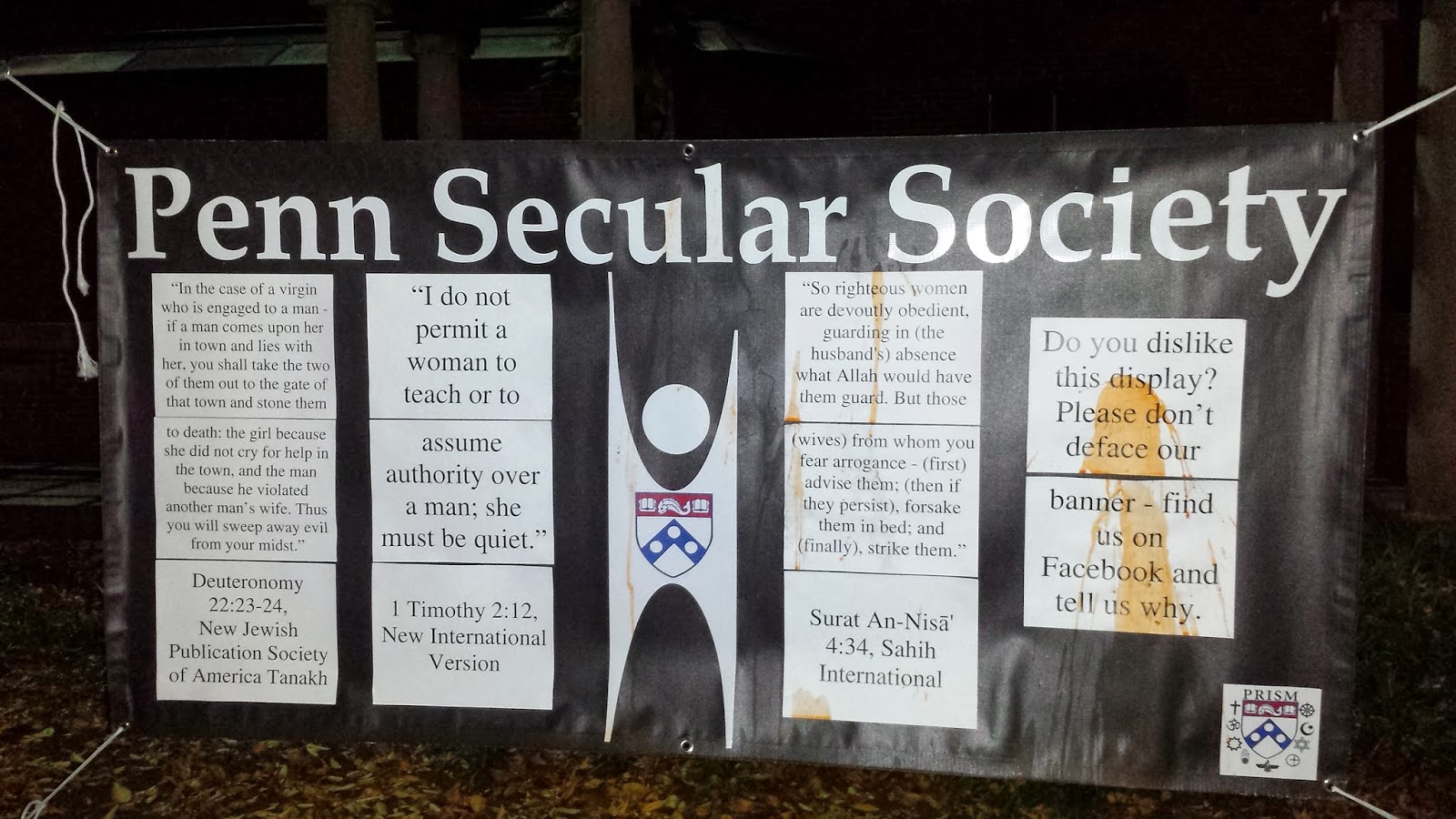 We’ve decided to not clean the banner this time, in the hopes that [passersby] will take notice of the vandalism and hopefully learn something.

Neither banner was all that provocative, in my opinion, but even the simplest jab at religious belief was enough to turn someone (or some people) against them. That’s why we need groups like the Penn Secular Society; they show us that even a proudly diverse campus like UPenn isn’t as welcoming to minority groups as it might claim to be.

***Update***: Two letters-to-the-editor were printed in yesterday’s student newspaper regarding the group.

The first one — which is pretty cringe-worthy — makes it sounds like the atheist group is proselytizing its non-belief:

The secular students on campus deserve a community of their own, and every religious student should be encouraged to think critically about his or her beliefs. What I am struggling with, and from whence the rationale for this piece comes, is where in that mission statement does it advocate tearing down any belief you don’t ascribe to and stepping all over it?

In short: Why are you challenging my precious, flimsy beliefs?!

The best part is how the letter writer, in the next paragraph, defends evangelical Christians for *actually* proselytizing because “they have a duty to save non-believers from eternal damnation.”

The commenters are letting him have it.

… I beg of you [vandals], please stop. You’re just making us look bad. I would have hoped that your religion would cultivate a love even for those who disagree with you, and I regret that your time on a university campus hasn’t yet taught you to handle differing opinions like an adult. I can’t play God, and I certainly don’t believe that my religious expression is the only valid one, but I think that if you want to let the Divine into your life, there are better ways than throwing coffee on other people’s ideas.