Tomorrow, before the Supreme Court hears the oral arguments in Town of Greece v Galloway at 10:00a, atheists and other supporters of church/state separation will gather outside to rally in support of the plaintiffs.

At 8:30a (ET), American Atheists will host a rally on the steps of the Supreme Court. 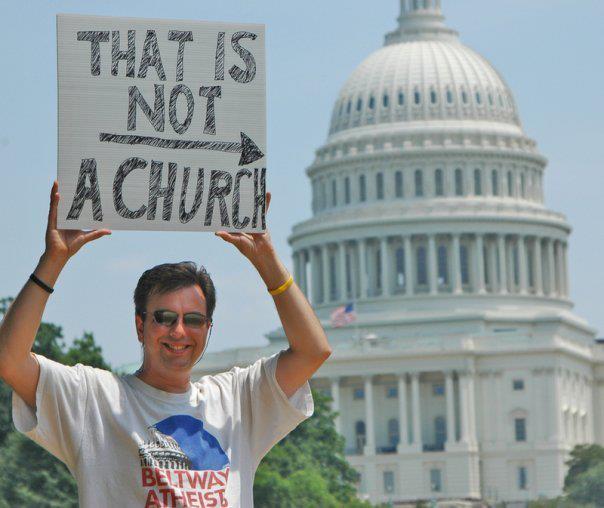 “If council-members feel they are unable to do their jobs without saying a prayer first, there is nothing stopping them from praying at home, or even just before the meetings start if they want to,” said Amanda Knief, Managing Director. “But once a meeting is called to order, you’re representing the city, you’re representing all of us, Christian or not, religious or atheist. And at that point, you have two options: You either share this time with everyone, or your personal religious beliefs need to stay personal. Equality is all-or-nothing. Either we all get a turn at the table, or we all keep it to ourselves.”

The Secular Coalition for American will have their own gathering on the steps beginning at 9:30a:

Secular Coalition Executive Director, Edwina Rogers, said the Court’s decision will have a major impact not only on secular and nontheistic Americans, but Americans from all walks of life, no matter how the Court rules.

“The plaintiffs have endured harassment and vandalism for standing up for our nation’s core secular founding principles,” Rogers said. “It’s unconscionable that in a country founded on the separation of religion and government, any citizen would be coerced into prayer while trying to participate in the civic process.”

If you go, please send us your pictures!

In the meantime, Todd Stiefel of the Stiefel Freethought Foundation passes along the message he would deliver to the justices if he could give the closing arguments:

If the government of Greece is to win Town of Greece v. Galloway, the religious right will predictably hail it as a victory for religious liberty. But, liberty for whom? Do the citizens of Greece win the right to pray to the god of their choice? No, they already have that right. Do American citizens win the liberty to choose which religious sect they will favor? No, they already have that liberty. Citizens will not win any liberties, nor will they lose any, regardless of how this case is decided. This case is not about the liberties of citizens.

These are the choices you face. May local governments choose Protestantism over Catholicism? May the U.S. government choose one sect to honor over another? Does the government even have religious liberty to win or lose, or are liberties for citizens, not governments?