A student in Whitley County, Kentucky was getting ready to run in the high school regional cross country race when she suddenly decided to drop out.

This was her bib number: 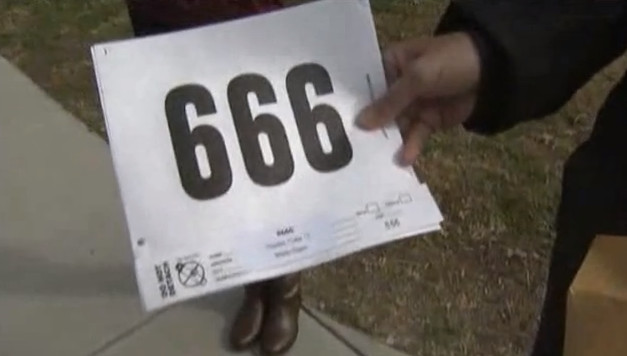 Yup. The mark of the beast. (Or at least, one interpretation of it.)

You see, Codie Thacker is a very religious young woman, and she said just the thought of wearing that number made her “sick.”

Along with her coach, Gina Croley, she tried to get a different number, but was turned down by three separate officials.

So, rather than run the race under the number 666, she decided to drop out.

I didn’t want to risk my relationship with God and try to take that number.

And there you have it. A kid who had been training for months felt like she had to drop out of an important competition or risk offending her god. Granted, she’s a junior and next year’s competition awaits her, but still — it’s such a bummer all around.

I can’t seem to muster up much vitriol for Thacker. I think it was the wrong choice to make, and I think she made it for stupid reasons, but I just kind of feel sad for her. Or maybe not for her but about the general situation. It’s just kind of a microcosm of how perfectly well-meaning people make poor decisions that are against their own best interest for such a silly reason.

I also kind of think they should have given her a new number, maybe? Is that opening the door for people requesting their lucky number and walking all over the officials? Probably, I suppose.

What I can get super annoyed at is the reporting from Lexington’s NBC affiliate who had this kicky line:

There won’t be any more races for Thacker this season. She’s now focused on next year, ready to keep running without running away from her beliefs.

I don’t think I’ve ever rolled my eyes that much since I started writing for this blog. And I’ve written multiple posts about Pat Robertson. It’s just bad, pandering, stupid, pandering, bad, pandering, pandering, trite, icky writing. I’m also imagining how pleased with himself the reporter was when he came up with that little capper.

In any case, before any Religious Right group complains that this was an attack on Christians, let it be known that the assignment of the numbers was purely random. Furthermore, the Kentucky High School Athletic Association now says they would have changed the number if they knew Thacker’s reasons were religiously-motivated… which is a pretty strange thing to admit, because is there really any other kind of reason for students to say they don’t want the number 666?

November 5, 2013
Supporters of Church/State Separation Will Rally Tomorrow Morning in Front of the Supreme Court
Next Post