Liberty Counsel is back with their annual list of where you shouldn’t be shopping this year because some stores dare use the phrase “Happy Holidays” instead of “Merry Christmas” in their advertising. 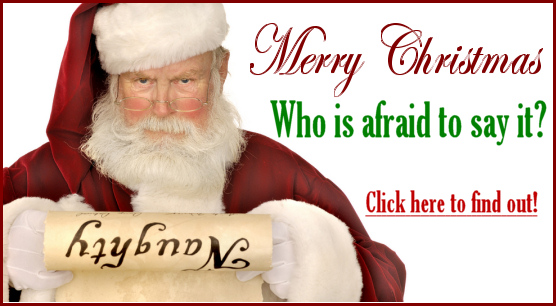 This year, you better not waste your time on Tractor Supply Company… where I know you’re all planning your holiday shopping:

Only TWO mentions of Christmas?! How will Jesus know it’s his birthday if we only have TWO mentions?!

And they’re definitely not happy with EB Games:

Web site: “Christmas” is silent and neglected on home page as well as throughout the site. A “Christmas” search revealed only fourteen manufacturer-labeled “Christmas” products and four of those items associate the words nightmare and killing floor in their titles.

ONLY FOURTEEN?! SOMEONE THINK OF THE CHILDREN!

Also: How is Liberty Counsel able to complain about how Christmas is “silent and neglected” on the site while saying in the very next sentence that a search for “Christmas” leads to fourteen products?

(And what do they have against “The Nightmare Before Christmas”?)

You guessed it: Just go to Hobby Lobby. Or Cracker Barrel. Or David Barton’s WallBuilders. They’re all “Nice.”

So is Hallmark. Because they make Christmas cards.

Noticeably absent from the Nice list is Chick-fil-A. You may recall that last year, the Christian-owned company promoted the “holiday” season:

Yet, Liberty Counsel didn’t dare to put the company on its Naughty List. This year, they’re hoping we just don’t notice they’re ignoring it.

I said this last year, but I’ll say it again now:

Liberty Counsel really believes Christianity is under attack every time someone says, “Happy Holidays.” They don’t give a shit that there are non-Christian customers out there and they certainly don’t care that there are other holidays being celebrated this December other than Christmas. With them, you’re either Friend or Foe, Nice or Naughty, Christian or “Other.”

And this list just shows that Christians (at least these crazy fundamentalist types) are incapable of connecting outside their bubble. To them, everything is a theological argument. And not honoring their God is an affront to everything they stand for.

Just once, I’d love to see a business campaign to get on the Naughty list. I want to see them fight to be so inclusive and tolerant of everybody that Liberty Counsel blows a fuse because “tolerance” is a four-letter word to them. How sweet would that be?

November 5, 2013
Video Footage from Greece City Council Meetings Shows Why Non-Christians Were Unwelcome There
Next Post

November 5, 2013 New Radio Ad Tells Atheists 'Where To Go'
Browse Our Archives
What Are Your Thoughts?leave a comment