It’s not every day that the mayor of a U.S. town seeks the guidance of a convicted sex criminal, especially in matters of the law. Enter George M. Allred, who wrote gushing letters to polygamist Warren Jeffs (pictured below) of the Fundamentalist Church of Jesus Christ of Latter-Day Saints, soliciting Jeffs’ help with pressing government business — such as the hiring of a new police chief. (Jeffs, as you may recall, is serving a life sentence for sexual assaults on girls aged 12 and 15.) 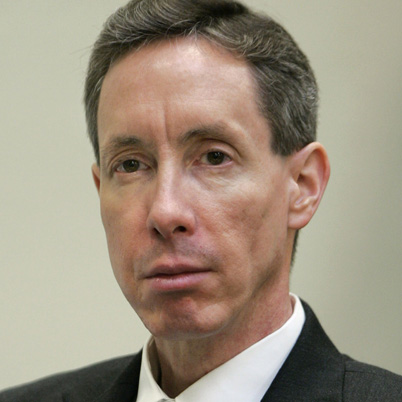 The Salt Lake Tribune has the story:

In 2012, the mayor of a mostly polygamous town reached out for help governing — from imprisoned FLDS Church leader and convicted sex offender Warren Jeffs. George M. Allred’s request for Jeffs’ insight is documented in a pair of letters filed in a Department of Justice civil-rights lawsuit against Colorado City, Ariz., and Hildale, Utah, collectively known as Short Creek.

“As my spiritual leader I write to you today with joy and rejoicing in the Lord our God, even Jesus Christ,” Allred begins. “It is my firm belief that you have all rights, power and ability to get the very word of God for all who desire it.”

Allred then explains that the town’s police chief has retired and he welcomes Jeffs’ suggestions on who should fill the post. “If the Lord had someone he would like to have in that position,” Allred writes, “it would be very helpful to get his sure word on who he desires to occupy that position.”

In a second letter, Allred wrote to Jeffs for advice on overhauling the town charter.

The letters are evidence in a lawsuit that Federal authorities filed last year, charging that non-FLDS members in the towns of Colorado City and Hilldale were denied access to housing, and that the defendants have

… coerced, intimidated, threatened, and interfered with the housing rights of non-FLDS members. … In addition, the Cities’ officials have misdirected and misused public resources in the service of the FLDS.

The Tribune explains that

If true, it means the separation of church and state — a constitutional bedrock of pluralistic America — is nonexistent, replaced by an iron-fisted theocracy in which Jeffs’ edicts are enforced above the law.

Part of that godly Utopia is or was a sophisticated and remarkably extensive surveillance system run, at one time, by a man named Patrick Barlow (who may in fact be the same person as George Allred).

Patrick Barlow states he worked security for the FLDS Church and spied on members and nonmembers alike. Barlow reports in his statement that church security had access to city cameras and could link the church and city systems.

Another article on the FLDS spying scandal quotes a man named Guy Timpson who says he was in charge of the cameras for four months until he became disillusioned and quit.

Members of the FLDS church took shifts operating the system 24 hours a day, seven days a week. Timpson said that in 2010, two men worked “four days on, three days off” watching the community. The cameras are high powered and can zoom in on license plates and faces. Another camera sits high above the meetinghouse on a flag pole and spins 360 degrees at all times. “We could see what people were saying just by reading lips if you were good enough,” he recalled.

The Federal lawsuit alleges that non-members of the Fundamentalist Church of Latter-Day Saints would face petty attempts to run them out of town. For instance, municipal authorities who colluded with Jeffs’ organization refused to provide water hookups to residents who didn’t belong to the Church.

The case is scheduled go to trial in a few months.

November 4, 2013
Jehovah's Way: At the First Sign of Their Religious Doubt, Freeze Out Your Own Flesh and Blood
Next Post

November 4, 2013 William Lane Craig: The Church is Getting Too 'Feminized'
Browse Our Archives
What Are Your Thoughts?leave a comment