Just days before the Supreme Court hears the case of Town of Greece v Galloway, the city of Pismo Beach, California just got served with a major lawsuit by the Freedom From Religion Foundation over sectarian prayers at city council meetings.

In short, the Pismo Beach City Council has offered explicitly Christian invocation prayers at its meetings 125 of the past 126 times (from 1/1/2008 through 10/15/2013). That one exception still included the city’s Chaplain Paul Jones saying the Pledge of Allegiance. (And why does the city have an official Chaplain in the first place?)

There’s also historical revisionism in many of the prayers, the kind that would make Christian pseudo-historian David Barton proud.

FFRF has the transcripts (more than a hundred pages of them, which must have taken an incredibly long time) and the invocations are simply indefensible:

Tonight, we invoke your presences and Your Will to become the resource that you give to each of our elected leaders and their support staff. God bless the citizens and the guest of our beautiful city. God bless America and protect America. This invocation we pray in the name of our personal Savior and Lord. Amen.

We are aware that the greatness of America is largely the result of our founding fathers honoring God and honoring the precepts of the Bible. And so tonight, we wholeheartedly join our national leaders of generations past and affirm our nation’s motto, “In God, we trust.”

Our Heavenly Father, history has documented that the most frequently cited source in the founding era of our great country was the Bible. In 1777, Congress desired to have a Bible printed under their care and their encouragement, and then they ordered 20,000 copies of the Bible. [FFRF claims both of these statements are untenable, unverified, and untrue.]… And so tonight, we seek your help, oh God, through daily prayer and daily Bible reading that we may be able to guarantee for generations to come that we remain one nation under God, indivisible, with liberty and justice for all, for the more we absorb the Scriptures and seek to live by its precepts, we discover that God is able to accomplish amazing things for his purposes through our lives, and so unitedly tonight we affirm our nations’ motto, “in God we trust.”

We ask that you will cause every citizen to perform their civic duty and vote this season. Cause us to elect leaders who will stand up for the clear standards that are expressed in the Bible, the Holy Writings of God. May they stand firm for our freedoms to live by these standards.

You get the idea. Lots of Bible where it doesn’t belong.

The FFRF sent a detailed complaint letter to the city council over a year ago but they never received a response, and that what’s brought on this lawsuit.

Among the issues in the lawsuit, aside from the invocations, is the establishment of a City Chaplain in the first place, something the city knew could spell legal trouble when they discussed it in March of 2005: 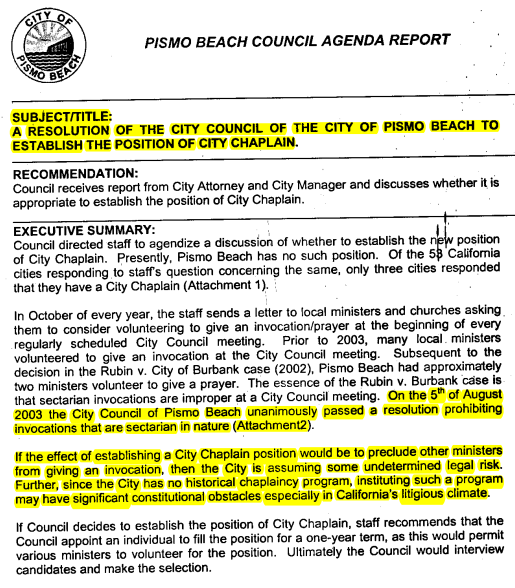 It’s important to note that this is not a federal lawsuit; only a state one. FFRF says what the city council is doing violates California’s constitution specifically so this case can proceed no matter what happens with the Greece case:

FFRF’s new lawsuit invokes only the California Constitution’s No Preference and Establishment Clauses, as well a civil rights provision. Regardless of how the Supreme Court decides the Greece case, FFRF’s case can proceed, and could carve out protections against government prayer for all citizens in the country’s most populated state.

The plaintiff in the case is the brave Dr. Sari Dworkin, an FFRF member and a member of Atheists United of San Luis Obispo, the group that initially brought this case to FFRF’s attention. Dworkin attended several of these meetings and protested the prayers, only to be forced by council procedure to give her name and address. The lawsuit notes that “after they had ignored her concerns, she felt vulnerable and uncomfortable, and had trepidation about attending any further meetings.”

There’s no reason to include Christian prayers in any city council meeting. That’s what churches are for. This crosses the line so badly that the taxpayers in Pismo Beach should be pissed off at how their representatives are about to throw away a good chunk of their money in pursuit of something that never should have happened in the first place.

November 4, 2013
Bad Jesus, No Candy: Illinois School Does About-Face When Student Dresses as Savior for Halloween
Next Post

November 4, 2013 An Update on the Financial Boycott Against the Park District Board Member Who Wouldn't Stand for the Pledge
Browse Our Archives
What Are Your Thoughts?leave a comment