Texas A&M University is developing a new elective class for biomedical sciences students that will be all about the intersection of religion and science… and it makes no sense at all:

“We explore how neuroscience and religion should inform and enrich each other,” Klemm said. Although the course is based on reading assignments from his textbook, titled “Core Ideas in Neuroscience,” those principles will be accompanied by religious and philosophic perspectives. For example, when discussing evolution of the nervous system, the students will also consider the Biblical book of Genesis and other creation stories. The lesson about action potentials — the cellular process that transmits information within and between neurons — will also include a discussion of Descartes and dualism between mind and brain.

That’s great. So they’ll discuss how our nervous system evolved and then talk about fairy tales that add nothing to their science knowledge. Sounds like 50% of the class would be wasted.

Science and philosophy can go together. So can science and ethics. But science and religion? How would learning what Genesis says about anything help students learn more about neuroscience? We never find out.

The class will be taught by Dr. W.R. Klemm (below) who has a reason he wants to throw religion into the mix: 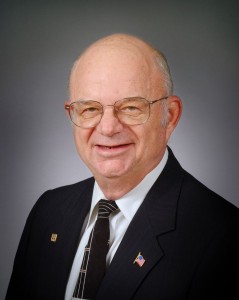 “Many polls show that most scientists are atheists,” Klemm said. “I think that is unfortunate to say the least.”

Why is that unfortunate? Again, there’s no reason atheist scientists couldn’t contemplate the same “big” questions about things like ethics and free will. But the Bible? Genesis? Why not the Koran? Why not the Book of Mormon? Why not How to Use Dianetics?

One of Klemm’s goals for the course is to show students that science and theology don’t have to contradict each other. “I am hoping that the students learn to be more introspective, open minded and mature about their spirituality,” Klemm said. “I fully expect this course will change the beliefs of everyone involved, and that includes me.”

They don’t have to conflict… but they totally do. One adds to our body of knowledge. The other impedes it by distracting us.

You have to wonder who would even want to fund a course like this:

Klemm and [director of the Texas A&M Religious Studies Program in the College of Liberal Arts Dr. Donnalee] Dox have also submitted a pre-proposal to the Templeton Foundation to enhance the course and to develop an academic discipline around the theme of “Belief Neuroscience,” with an emphasis on why humans — religious and otherwise — believe things even with incomplete evidence.

Students might want to take the class but they should know it won’t make them better scientists. It’ll only make them more confused and fill their heads with non-sensical ideas.

November 3, 2013 You Can Now Pre-Order A Better Life: 100 Atheists Speak Out on Joy & Meaning in a World Without God
Browse Our Archives
What Are Your Thoughts?leave a comment