Amanda Knief of American Atheists appeared on CNN this morning to discuss the upcoming Supreme Court case of Town of Greece v. Galloway: 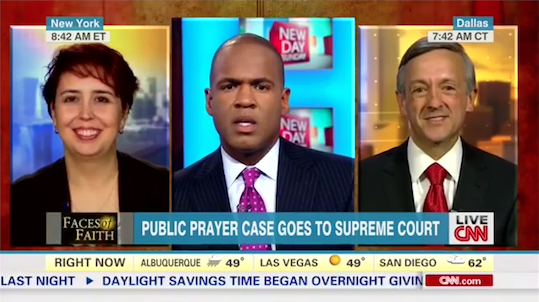 Knief was the sane side of the debate, going against Pastor Robert Jeffress — a guy who said last year that if Christians didn’t vote “biblically,” they were no different than the people who brought on the Holocaust.

She had him tripping over himself by the end of it. Jeffress’ main points were that the majority of the town was Christian and he would never have prohibited people of other faiths from delivering those invocations. Of course, if the officials in Greece made it clear than anyone was welcome, there wouldn’t be a Supreme Court case in the first place. They didn’t do that. They sought out Christian pastors specifically. Jeffress has no defense to that.

He came off as a man afraid that the status quo might soon change, leaving him without all of his power.

November 3, 2013
This is How the Viral 'I'm Actually An Atheist' CNN Segment Came About
Next Post

November 3, 2013 Texas A&M University to Offer New Course Combining Neuroscience with Religion
Browse Our Archives
What Are Your Thoughts?leave a comment