For years now, I’ve commented on one of the big events held by the Atheist Agenda campus group at the University of Texas at San Antonio.

Every year since 2005, members of the group would set up a table on a well-traveled part of campus and offer pornography in exchange for holy books. They called it “Smut for Smut”: 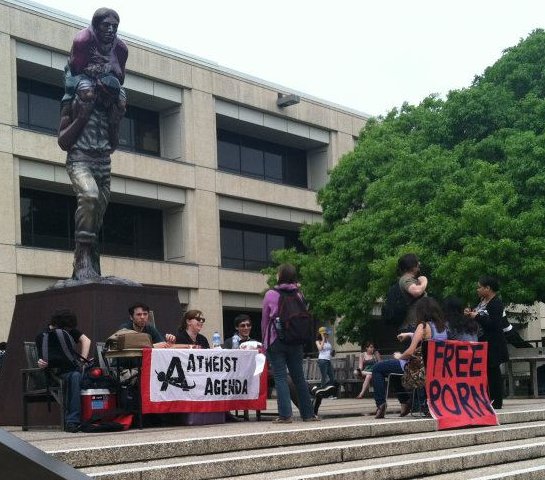 The point was pretty obvious: the Bible has plenty of sex (and violence and disturbing scenes) in it, so why not make a fair trade?

In a way, the campaign worked exactly as they had planned, at least on me. My initial revulsion eventually gave way to saying, “Hmm… maybe they have a point.”

So it’s bittersweet — though probably for the best — to announce that “Smut for Smut” will no longer be taking place at UTSA. The group has softened up and, under new leadership, they’re taking a new approach to campus activism:

This semester, Atheist Agenda renamed itself the Secular Student Alliance, one of 402 groups affiliated with an Ohio-based umbrella organization of the same name. The makeover underscores a national trend in which secular humanist groups have been dropping edgy, insult-minded strategies for more welcoming ones.

“We don’t plan on doing (the smut-for-smut campaign) ever again,” said Jacob Schmidt, an officer with the newly formed group. “We encourage conversation, but we did it in the wrong way, just getting a rise out of people. And once you make someone defensive about their beliefs, you’re not going to get through to them.”

“A lot of people would come to meetings but then everyone would go straight to attacking religion,” said Schmidt, a former Atheist Agenda member. “It would really turn people off from the group. People left because we were so aggressive. We wanted to kind of settle down.”

In the meantime, groups who like the “Smut for Smut” idea but find it a little too aggressive for their tastes can always try a “Fiction for Fiction” swap, with classic literature given out in exchange for Bibles and Korans.