The Starke Reality: Atheist is No Longer a Dirty Word November 1, 2013 Hemant Mehta

The Starke Reality: Atheist is No Longer a Dirty Word 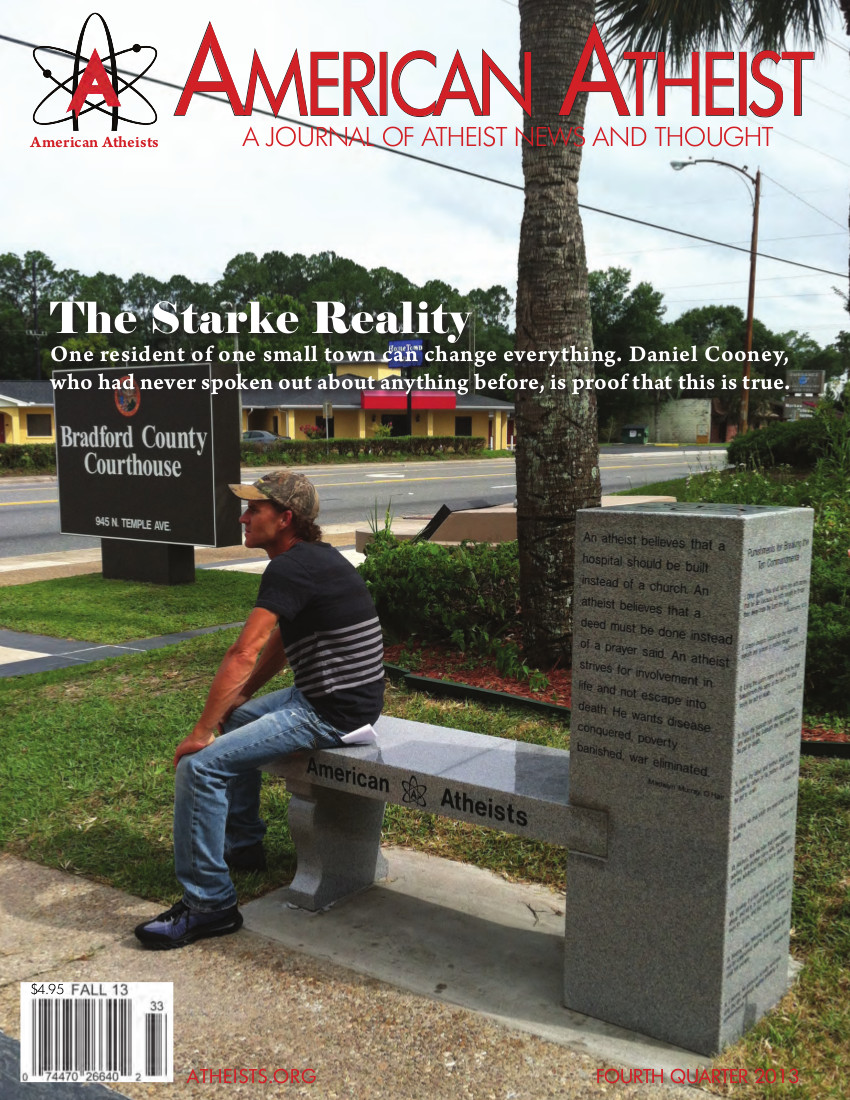 [Endnotes have been omitted from this article.]

On June 29, 2013, American Atheists accomplished a victory unprecedented in American jurisprudence. With the consent and cooperation of the Commissioners of Bradford County, Florida, we dedicated a monument to Atheism on the county courthouse lawn in the City of Starke. This historic event was made possible by the earlier placement of a six-and-a-half-ton monument emblazoned with the Protestant version of the Ten Commandments in that same courtyard.

In May 2012, when the monument was first erected, a peaceful demonstration was organized by Ken Loukinen, American Atheists’ Director of Regional Operations. One of the participants was Dan Cooney, a resident of Starke and an Atheist. Cooney is hardly the demonstrating type. He is reserved, unassuming, and uninterested in the limelight. But, as he told the crowd at our unveiling a little over a year later, this religious monument on this government property was something he could not ignore.

“Something like this can make you wonder — and you shouldn’t have to — whether you’re going to walk into this building and get a fair trial,” he told one Florida newspaper. So he put aside his preference to live inconspicuously and joined American Atheists as the named plaintiff in our lawsuit. And by walking out of his comfort zone and into a court room, despite knowing full well that there might be backlash, he changed the world.

The lawsuit was filed on May 24, 2012, in the United States District Court, Middle District of Florida, Jacksonville Division. Working with me was Tampa attorney and American Atheists member Eric O. Husby. Our complaint was simple. We alleged that the placement of the engraved rock on county property violated both the United States Constitution and the Florida Constitution because it amounted to an unlawful attempt to establish a religion. We asked that the monument be removed.

The defendant in our lawsuit was the Bradford County Commission. They responded by advising the court, under oath, that the rock in controversy was not theirs. They claimed that it had been set up, and would be maintained, by a group called the Community Men’s Fellowship. They also claimed that this religious icon was not religious, but a statement of the principles that underlie our national existence and identity. However, this was, and is, a rendering of Protestant Christians’ understanding of their god’s rules.

The Community Men’s Fellowship then filed a separate lawsuit in the same court as our case against Bradford County. They asked a federal judge to order that the granite stay. They alleged that they owned the six-and-a-half-ton rock and that they, not Bradford County, had placed it on public land by virtue of the area being declared a “free speech zone” or a “public forum.”

This 13-thousand-pound graven image was not, they said — as had others — a religious artifact. We were expected to believe them, even though it memorializes text purporting to have been drafted in the genuine penmanship of a god, it was dedicated in a religious ceremony, and it was prayed over by religious devotees… well… religiously. If this is not religious, then it may well be fair to ask, How would it look if it were religious?

For the purposes of pretrial litigation, the court combined our lawsuit with the lawsuit filed by the Community Men’s Fellowship. Given all of the legal pleadings in this case, it was apparent that to litigate all of the claims and defenses would mean navigating a legal minefield of seemingly unclear or contradictory legal opinions and precedent. Such a process could go on for years in both the trial and appeals courts. We believed our case had the stronger legal support. The other side believed theirs did. When the case was directed to court-ordered mediation, we saw an opportunity to resolve the matter in a groundbreaking and revolutionary way.

It was up to the parties on both sides of this case to agree on a mediator, and they agreed on Alexandra (Sandra) Hedrick. She is an attorney, an honored trial lawyer, a teacher of law, and an experienced and respected federal mediator. She is also an ordained Presbyterian minister. As a kid of a Presbyterian preacher myself, I agreed that she would do nicely.

Everything said in mediation is confidential; the mediator, the lawyers, and the parties are under Federal court order not to reveal the communications that took place. As such, we can never lawfully reveal what was discussed during mediation. What happens in mediation stays in mediation.

What I can say is that when our settlement was reached, it was like a puff of white smoke. The Community Men’s Fellowship and American Atheists would agreed to dismiss their respective lawsuits and American Atheists could erect and dedicate a memorial to Atheism of similar size and placement on the Bradford County Courthouse lawn, just a few feet away from the Ten Commandments. The written agreement is a public record on file with the court.

Our monument to Atheism is a bench carved from granite. On three sides of the rectangular prism that supports the bench are quotes by Thomas Jefferson, Benjamin Franklin, John Adams, American Atheists’ founder Madalyn Murray O’Hair, and the 1797 United States Treaty with Tripoli. On the fourth side are Bible quotes enumerating the mandatory punishments for breaking each of the Ten Commandments. The predominant penalty is death. Have you failed to honor the Sabbath? Have you been rude to your parents? Have you graven an image? Well, the Bible has some bad news for you.

On June 29, 2013, more than 200 supporters attended our dedication. They stood in the rain to hear speeches, to cheer, and to know we were all doing something important. About a dozen people who called themselves Florida secessionists quietly stood to one side, waving the Florida secessionist flag and various versions of the Confederate flag. The also brought signs which read, “The South is a Christian Nation,” “Preserve Florida’s Christian Culture,” “If you don’t like our Christian culture, go back home!” and “Florida for Floridians/Yankees Go Home,” to name a few.

Across the street were another handful of people who blared Christian music and held hand-written signs that said, “Jesus,” “God Loves U,” and “Hook for Jeses” [sic]. 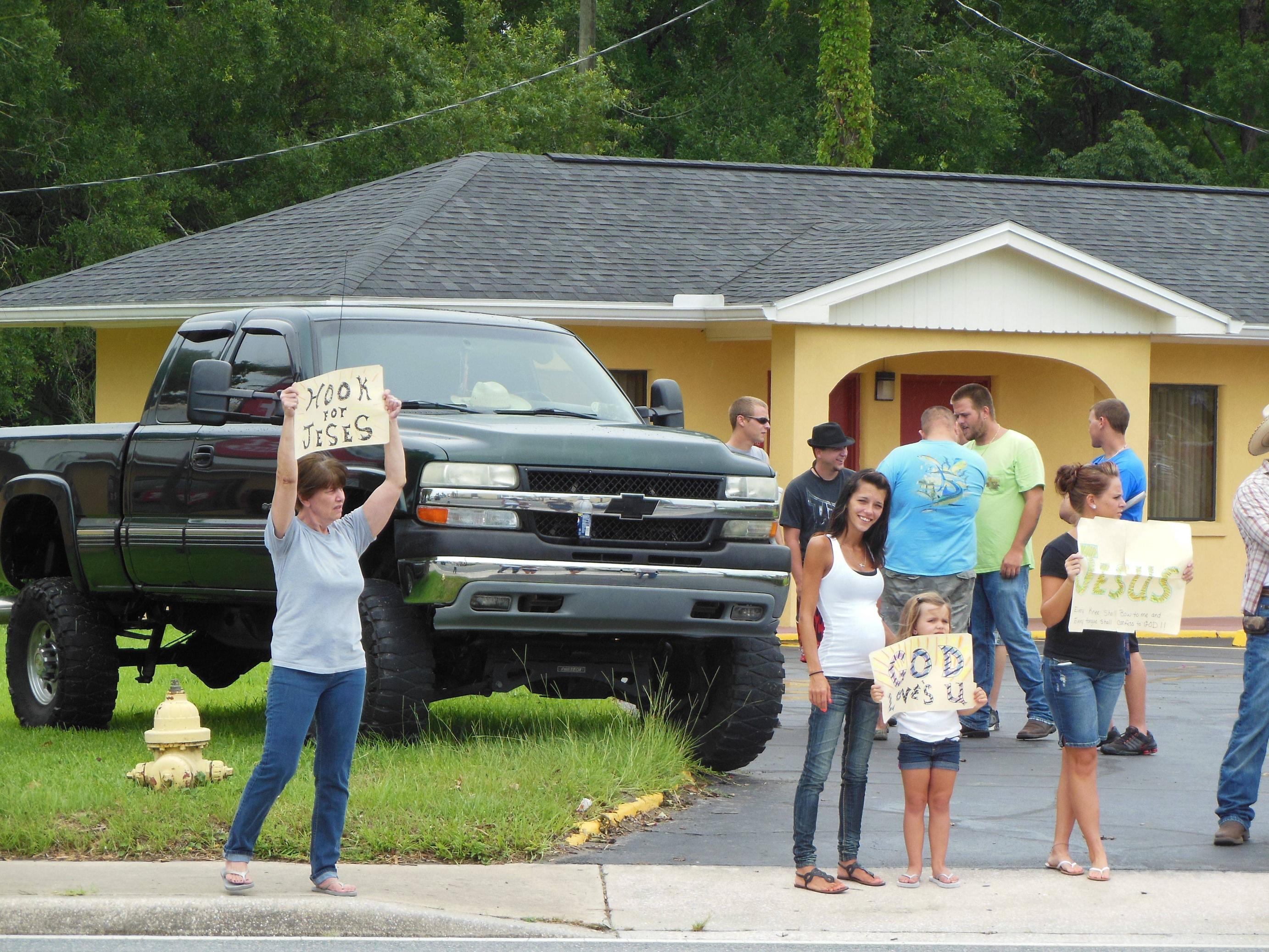 But Atheists and supporters of church/state separation were the majority that day. In his address to the crowd, American Atheists President David Silverman announced a new, ongoing project. “This is not only the first permanent Atheist-sponsored monument on public land; it’s the first of many. Thanks in part to a generous and anonymous donor, we are embarking on a mission to place 50 monuments on 50 public lawns and walls where religious monuments currently stand. Local Atheist organizations are encouraged to seek out places where the Ten Commandments or other religious propaganda are placed on public land, and American Atheists will work with those local groups to ensure that the truth is placed next to the lie, that civility is placed next to barbarism.”

The John Adams quote we chose for the monument reads, “It will never be pretended that any persons employed in that service [of authoring the Constitution] had interviews with the gods, or were in any degree under the influence of Heaven.” This monument ensures that these words will not be forgotten. For many passers-by, this quote will be the first time they learn that our nation was not founded on religious principles. For others, it will be the first time they realize they are not alone in their Atheism. The courage of our plaintiff, Dan Cooney, has already inspired many closeted Atheists to “come out.” The monument, which would not have been possible without his actions, will inspire even more.

The Starke Reality is that “Atheist” is no longer a dirty word.

Edwin Kagin is the National Legal Director for American Atheists. 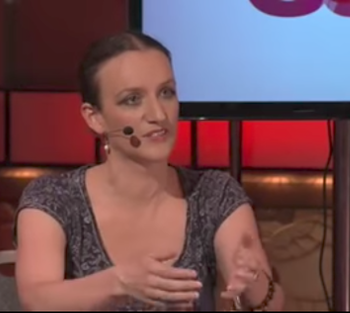 November 1, 2013
Kate Smurthwaite Responds to a Nun Who Claims Atheists Have 'Faith'
Next Post

November 2, 2013 You Might Want To Get a Second Opinion on That Painting...
Browse Our Archives
What Are Your Thoughts?leave a comment