The study, published in the Journal of Urban Economics, was done by Michigan State University’s Todd Elder and University College Dublin’s Christopher Jepsen.

Catholic school children actually do better at an early age (i.e. kindergarten) but that’s likely because they come from the kinds of families that can afford to pay private school tuition, giving them a bit of a head start in life. As they get older, however, the advantages fade: 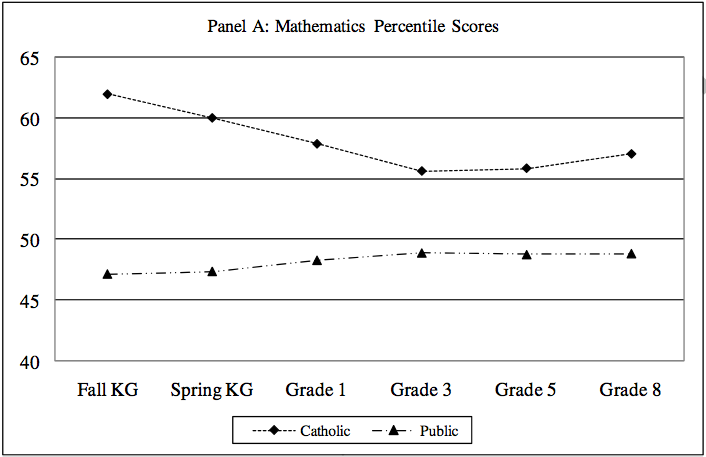 … if Catholic schools were truly better, as past research implies, that achievement gap would widen as the students progressed through school — and it doesn’t, in either math or reading, Elder said. In fact, when it comes to math scores, the public school students closed the gap somewhat by the eighth grade.

In other words, the researchers say, while public school students improve their math skills over time, Catholic students do worse. Any advantage that’s still there is more likely due to the head start they already had, not anything they acquired from their formal schooling.

According to the study,

This decline provides suggestive evidence that much of the Catholic school students’ advantage in mathematics scores in eighth grade is driven by differences already apparent at the beginning of kindergarten, not by higher rates of learning; if anything, the implied effects of Catholic schooling are negative.

Why aren’t Catholic schools doing better than public schools? It’s a question parents considering sending their kids to one ought to be asking, especially when they consider all the expenses.

The study notes that in 2008, private elementary school teachers had an average salary of $35,730 compared to $51,660 in public schools — a 45 percent difference that may make it difficult for Catholic schools to attract quality teachers.

Anecdotally, my friends who teach at Catholic schools often take those jobs, not because they have any allegiance to the Church, but because public school teaching jobs in the suburbs are just ridiculously hard to come by. Catholic schools, for them, are stepping stones to better-paying jobs later.

The researchers also suggest that public schools have better-designed curricula, whereas Catholic school teachers are essentially on their own islands.

“Taken together,” the study says, “the estimates in this paper do not point to any beneficial effects of Catholic primary schooling.”

Remember: None of this is to say public schools are automatically amazing — They have plenty of problems of their own. But let’s stop pretending that tuition-requiring Catholic schools will be better for your child than the public school across the street.

(Thanks to Matthew for the help and Joseph for the link!)

November 1, 2013 A Novel About a Young Celebrity Who Becomes an Outspoken Atheist
"Good point. They also improve the look of the home with those adorable, furry faces!"
Jennifer A. Nolan Judge Tosses Lawsuit from Religious Workers ..."
"He was the head coach of the Bucs when they won their first Superbowl."
Zorginipsoundsor Preacher: If the Government Executed Gays, ..."
"How do you do the insert link thing so the Nannybot doesn't pick it up ..."
Iain Lovejoy Preacher: If the Government Executed Gays, ..."
"A concubine who is a slave also does not have the ability to consent. The ..."
Anarkitty Shermer: Progressives Should Celebrate How Thomas ..."
Browse Our Archives
What Are Your Thoughts?leave a comment