New Study Shows That 6% of Tea Party Members Do Not Believe in God October 31, 2013 Hemant Mehta

According to the 2013 American Values Survey just released by the Public Religion Research Institute, 27% of Libertarians have no religious affiliation.

That makes sense, I guess — there are plenty of non-religious people who want smaller government and more individual freedoms.

But who the hell are these 9% of “unaffiliated” Tea Party members? (More to the point, most of the people in that group — 6% of the Tea Party overall — don’t believe in God!) 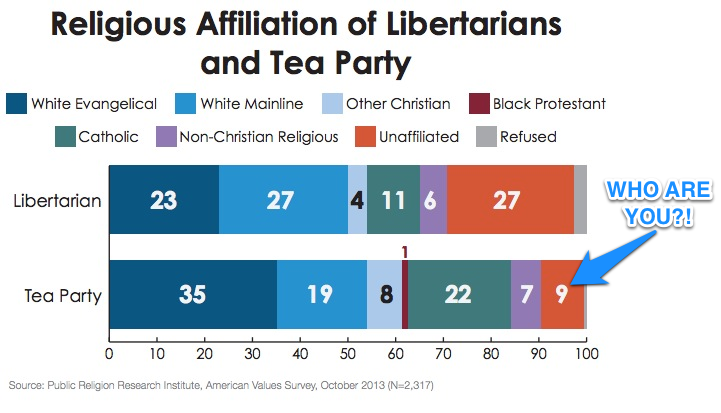 I’ve never met a Tea Party atheist, but I’m pretty sure celestial-teapot-creator Bertrand Russell would still disapprove when the party has degenerated into one consisting of so many ignorant, hateful people.

At least some of you Tea Partiers have to be reading this site, right? Tell us who you are! We won’t bite…