To Be With Her Father in Heaven, Girl, 12, Commits Suicide

***UPDATE, October 30: The story in the Mirror turns out to be substantially untrue, as far as we now know. See here for an important follow-up post.***

If heaven is a better place where you’ll be reunited in great happiness with all the dead people you once loved… well, what’s to prevent bereaved and impressionable people from offing themselves — and gaining a one-way ticket to paradise?

I got something in my eye when I read this heartbreaking news story of a 12-year-old girl who missed her deceased father so much that she hanged herself to be with him. My heart goes out to her mother and brother, and to all who loved her. 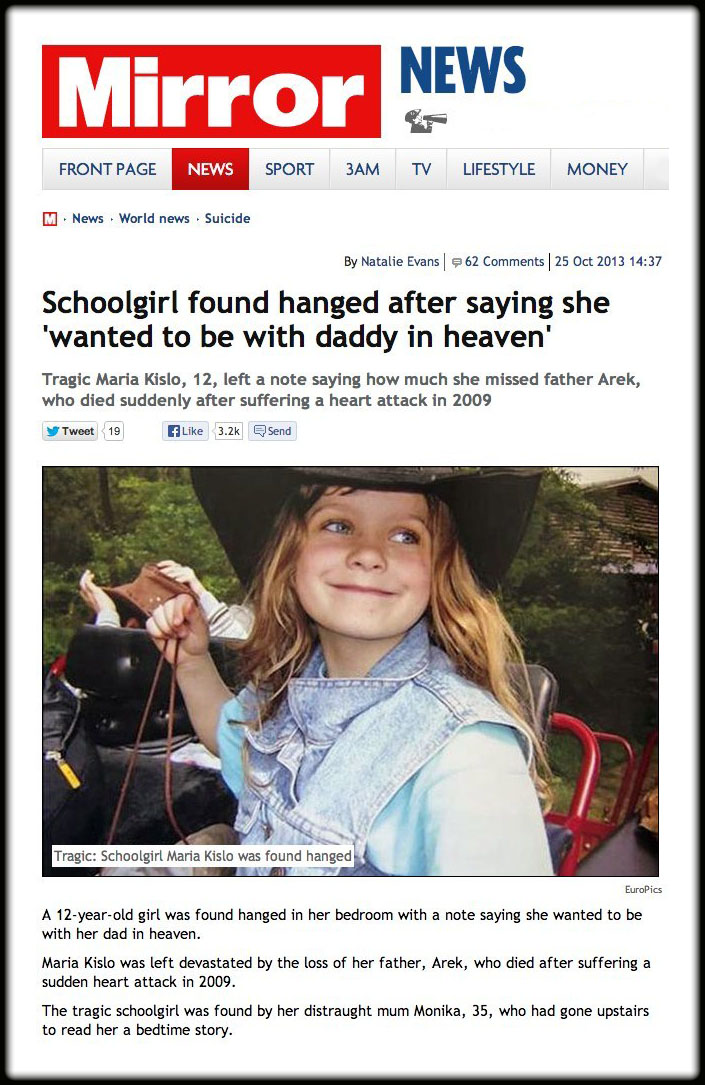 But the account also confirmed for me that the idea of heaven can be both comforting and toxic — make that deadly — at the same time. If Maria’s head hadn’t been filled with nonsensical ideas about heaven, where it’s all about the posthumous family reunions, she’d probably be alive today.

Her death is the somewhat prettier equivalent of the Islamic suicide bombers who think they’ll go on to great rewards in the hereafter.

October 27, 2013
Artist Peter Adamyan's New Exhibit Focuses on the Intersection Between Religion and Consumerism
Next Post

October 27, 2013 Jesus Didn't Wear Pajamas
"Sounds like a "Plot" to me."
Grant Jackson Franklin Graham Falsely Claims Christians Weren’t ..."
"Multiculturalism is just a fact. Not even all white people with Anglo last names share ..."
smrnda Franklin Graham Falsely Claims Christians Weren’t ..."
"Oh no, the voices in their heads lyed."
John Norris These Christians All Predicted Trump’s Second ..."
"Putting incompetents in charge of things is Republican strategy.Set government up to fail then claim ..."
InDogITrust Atheists Sue Ex-Education Secretary Betsy DeVos for ..."
Browse Our Archives
What Are Your Thoughts?leave a comment