Christian Author Francis Spufford: The New Atheists Are Naïve When It Comes to the ‘Actual Experience of Belief’ October 26, 2013 Hemant Mehta

Christian Author Francis Spufford: The New Atheists Are Naïve When It Comes to the ‘Actual Experience of Belief’

In an email interview with the New York Times, Francis Spufford, author of Why, Despite Everything, Christianity Can Still Make Surprising Emotional Sense, told reporter John Williams that his book wasn’t a direct response to the New Atheists, but he still felt they were Strawmanning theists:

Did the biggest inspiration to write this book come from the outspoken atheism of writers like Richard Dawkins and Christopher Hitchens?

Not in the sense that I thought they made a case that deserved arguing with directly. “The God Delusion,” “God Is Not Great,” etc., are (as they say) not even wrong. They treat Christianity either as a bunch of mock-scientific propositions about the universe which you can disprove, or as a social phenomenon which you can treat as entirely malign if you squint at it and wave your arms a lot. In both cases they operate a million naïve miles away from the actual experience of belief.

When 46% of Americans are Young Earth Creationists and more than two-thirds believe in the devil, hell, heaven, and angels, we’re not going after the fringe. Where are these magical Christians who don’t believe in miracles and prayer? Because I see them everywhere — and those “harmless” beliefs, which the atheist authors go after, are as unsupported and ubiquitous as the more obviously silly ones.

The atheist authors have an (unfortunately) realistic understanding of what modern-day Christianity looks like — and Spufford has no choice but to pretend that the majority of Jesus-followers don’t really believe all that nonsense — which is all it is — because if he doesn’t say that, his faith really isn’t worth defending in the first place. 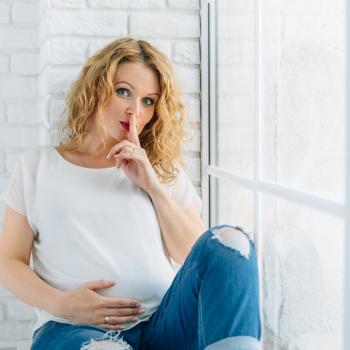 October 26, 2013
Mark Driscoll's Advice: Don't Marry People Who Are Pro-Choice Because They "Do Not Value Children"
Next Post

October 26, 2013 Billy Graham's Writers Aren't Even Trying Anymore
Browse Our Archives
What Are Your Thoughts?leave a comment