Vatican Suspends German Bishop Who Spent $42,000,000 on the Renovation of His Home

The Catholic bishop of Limburg, a small city in western Germany, apparently had noble motives when he boarded a plane to India with his vicar general in mid-January. “We were there to support social projects in and around Bangalore,” Franz-Peter Tebartz-van Elst reported after his return. They wanted to help children “who worked breaking stones,” he added.

But this man of God didn’t just want to do something good for the poor. He also wanted to do something nice for himself. On the upper deck of a jumbo jet, he and Vicar General Franz Kaspar had made themselves comfortable in the plane’s first-class section, which offers such amenities as champagne, caviar and a bed. 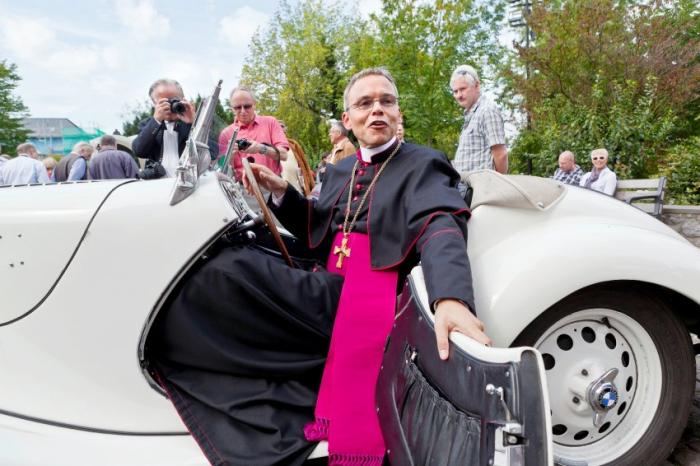 Prior to that, in his hometown, Tebartz-van Elst had already become the subject of amazement, ridicule, and anger for spending unheard-of amounts of money on the renovation of his official quarters. Local and then international media began dubbing him “the Bishop of Bling,” sometimes contrasting the price of the renovation — a cool $42 million, says the BBC — with his homilies about frugality and sacrifice:

Tebartz-van Elst preaches to his flock to sate their thirst with water not wine. “Renewal begins where the efforts toward making due with less are made,” he has instructed them. “The person of faith is dirt poor and rich in mercy,” he once said in a Christmas sermon. And on the Assumption, he declared: “Whoever experiences poverty in person will discover the true greatness of God.”

Suitably embarrassed by this Trumpian glitz-fest, last week, papal authorities summoned Tebartz-van Elst to the Vatican (not a place where excessive bling is usually frowned upon). I assume they nonetheless had an epic talk with him.

“A situation has been created in which the bishop can no longer exercise his episcopal duties,”

the Vatican declared yesterday, announcing that Their Man in Germany had been suspended. Few Vatican-watchers expect him to return to his Limburg duties.

Tebartz-van Elst’s stunning profligacy may be the final straw for some German Catholics who had remained loyal to the Church. After a string of clergy child-abuse cases, and the Church’s recent controversial practice of denying certain sacraments to those who decline to pay the hefty religion tax imposed via the German government (8 to 9 percent is added to believers’ regular income tax burden), the latest scandal just might push diehards from their faith.

They’ll have lots of company. For decades now, more than a hundred thousand Germans a year have abandoned the Catholic Church.

October 24, 2013 Christian Employee Seeks Appeal for Refusing to Work on Sundays
Browse Our Archives
What Are Your Thoughts?leave a comment