Let’s see how long you last watching this, starting at the 1:14 mark: 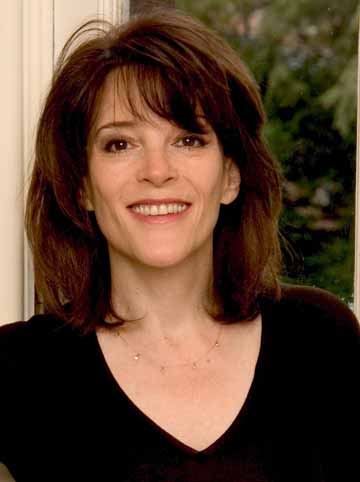 It’s all a lot of nonsensical spirituality, where you say so much and so little all at once. Like this excerpt from one of her books:

God has introduced into our minds an Internal Teacher, authorized to help us cross the bridge from fear to love when we find it difficult to do so by ourselves. The Internal Teacher is called by different names, from the Comforter, to Jesus, to the Holy Spirit. Whatever name we use, it cannot be called on in vain. Miracles are a divine intercession from a thought system beyond our own, bringing inner light into a darkened world.

And miracles are summoned by conviction. Conviction can be seen as an attitudinal muscle that gives us strength to see beyond appearances and invoke the possibilities that lie there. With God’s help, our own particular worldly veil of illusion — whether it takes the form of bankruptcy, recession, or any other form of fear — is lifted, and we can see beyond it. No matter what our problem awaits our open-mindedness and love…

Our interaction with the spiritual world is governed by our thoughts. When we know this truth and consciously align out thoughts with it — sometimes even despite how we feel — we activate its spiritual power. We transform our mortal circumstances by bringing our thoughts about them into alignment with a world that lies beyond.

Sounds nice. Means nothing. Absolutely nothing.

I bring all of this up because Williamson has announced that she will be running for Congress in California’s 33rd district, home of liberal hero Rep. Henry Waxman:

As I see it, the United States is a country in crisis. We won’t get out of it just by fixing something here and fixing something there. We as a country now have to dig deep down and ask ourselves some serious questions — who we are as a nation, and what we’re doing.

I’ve longed to see that kind of conversation and that level of consciousness inform the leadership of our country. I have asked myself how I could foster that, and have decided that the best way I can do it is to run for office myself.

That’s what we need. Congresswoman Deepak Chopra. Because why bother with legislation when you can just will Congress to do the right thing.

While I support much of Williamson’s platform — she will run as an Independent and caucus with Democrats if elected — there’s no reason to support another politician who believes in so many kinds of unsupported, unscientific nonsense. We have more than enough of those in the GOP. Since there’s a perfectly good alternative for voters in the district, let’s hope this campaign shines as brightly as the non-existent aura around her.

October 24, 2013
This Is What They Think Would Happen if Atheists Volunteered at That Soup Kitchen
Next Post

October 24, 2013 Vatican Suspends German Bishop Who Spent $42,000,000 on the Renovation of His Home
"I wonder if he's really a Hasidic Jew or just has one as a screen ..."
alverant Critic: Beth Moore’s Mild Critique of ..."
"OT: speaking of liberty, it looks like they are getting rid of those with the ..."
NoBodE Religious Liberty Shouldn’t Be More Sacred ..."
"The reason given is propaganda to say we beat the Russians. My mother told me ..."
cdbunch Rick Wiles: Dr. Fauci Must Be ..."
"Heimdall, lend me the vision to see the unseeable,Thor, lend me the strength of your ..."
seansd Arkansas State Senate Unanimously Passes “Day ..."
Browse Our Archives
What Are Your Thoughts?leave a comment