On his radio show yesterday, conservative Christian radio host Bryan Fischer spoke with a caller who had an idea of how to fix the health care crisis without that pesky ObamaCare: What if the government just gave every (legal) American $2,000,000 to cover future health care costs and left it at that? It sure as hell would be cheaper than the $634,000,000 it cost for the Healthcare.gov website! (Actually, the cost for the website was under $100,000,000, but you know, facts.) 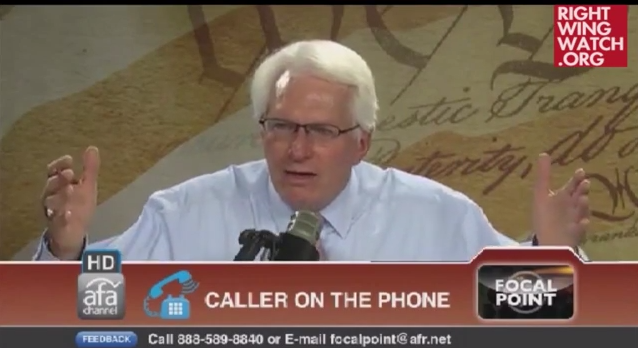 Just one problem with that.

That’s the fastest fallout from a get-rich-quick scheme *ever*.

I guess it’s not very surprising that someone who thinks the age of the Earth is measured in thousands of years would be duped by bad math.

You almost have to feel bad for him. Fischer sounded so deflated. He realized that something he really, really wanted to believe in just didn’t jibe with reality…

It’s the most wonderful sound I’ve ever heard. And the best part is that Fischer has the potential to experience it many times over.

Trillions of times over, even.

October 22, 2013 Ruler of Peaceable Brunei Gives Thumbs-Up to Stoning Adulterers and Other Sharia Savagery
"I calls 'em like I sees 'em!"
democommiescrazierbrother TN Republicans Tell Colleges to “Prohibit” ..."
"I think it's "Gaite Parisienne" (I haven't figured out how to do the accent on ..."
Erik1986 TN Republicans Tell Colleges to “Prohibit” ..."
"And what's truly amazing--not in a good way, btw--is that he hasn't reached his limit."
democommiescrazierbrother Scott Lively: I Asked God to ..."
"I would go even further: No mail-in, One voting day (but that should be a ..."
Bert MAGA Cultist: “I’ll Admit It. I ..."
Browse Our Archives
What Are Your Thoughts?leave a comment