An Open Letter to the Principal of My Kids’ Elementary School: Let’s Drop the Pledge of Allegiance October 22, 2013 Terry Firma

An Open Letter to the Principal of My Kids’ Elementary School: Let’s Drop the Pledge of Allegiance

This school year, my youngest daughter, who is eight, is being asked to say the Pledge of Allegiance in her public school every day. “Being asked” is too kind, really; it’s on her class program, so like any good little third-grader, she simply does it, every morning, without question — just like her 20 classmates. No one’s told her that she may opt out.

The school has no specific policy on saying the Pledge, leaving it up to individual teachers to incorporate it into their daily routines — or not. 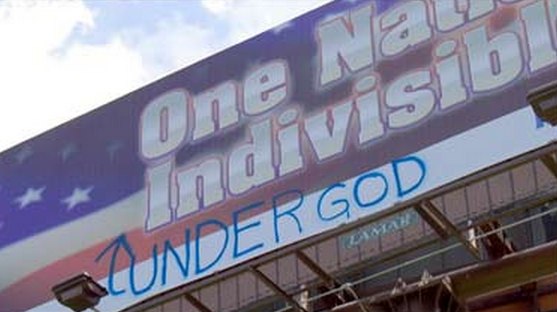 I thought about it off and on for a few weeks, finding it hard to know what to do, if anything. Not rocking the boat has its advantages, which in this case would include not exposing my daughter to the social perils of having an outspoken atheist for a dad, especially in the very school environment where this could hurt her the most. Then again, I’m terrible at keeping my mouth shut when something bothers me.

When I cautiously broached the principal about this, he immediately offered to discuss any concerns with the staff without disclosing my name, or those of my two school-age daughters. I thought that was pretty classy, so I felt unburdened to send him the following letter.

The Pledge of Allegiance has, unfortunately, morphed into a political and social hornet’s nest. I believe that our school would do well to shy away from it altogether.

First, as an American by choice (I’m an immigrant and became a naturalized citizen as an adult), my own allegiance to the United States is deep and sincere; I don’t love my country merely by accident of birth.

But it makes me uncomfortable when kids as young as 6 or 7 or 8 are asked to say the Pledge — any pledge, I suppose, that goes beyond the simple “I’ll be kind to others.” They’re not old enough to realize what’s being drilled into their skulls. I’d like my brood to learn they are first and foremost citizens of the world, rather than of one particular country. To the extent that reciting the Pledge of Allegiance over and over contributes to the notion of U.S. exceptionalism, “manifest destiny,” and other “We’re Number 1” jingoistic rot … well, let’s just say I’d like the children of our community to steer clear of all that potential ugliness.

But that’s actually the minor one of my two concerns. Here’s the bigger crux of the matter.

As you know, the First Amendment to the Constitution contains the Establishment Clause, which prohibits public schools from engaging in the promotion of religion. In 1954, amid rampant McCarthyism and communist-hunting, Congress decided to add the words “under God” to the Pledge, thereby instantly stamping those of us who do not believe in God, plus our children, as un-American, or somehow being of lesser stature. The Pledge had existed and thrived since its 19th-century inception, more than 60 years earlier, without that religious reference. 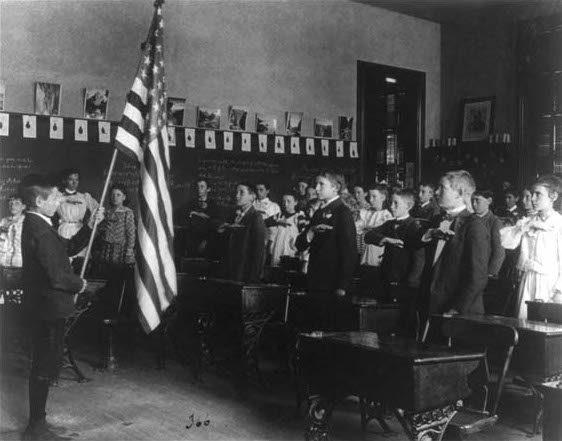 I wish the text hadn’t been amended the way it was, because the change puts lots of people in a bind — you and me, for instance, when it comes to your teachers making kids say the Pledge in class (daily). You understand, I’m sure, that parents do not look to public schools for instilling religious values in their kids. Nor do I want public-school teachers, no matter how well-intentioned, to promote or endorse the idea that there is a heavenly creator to begin with.

I suppose the children should be explicitly given the option of remaining seated and not having to recite the pledge, but that’s a highly unsatisfactory solution especially in an elementary school; it just opens up a difficult discussion they’re too young to comprehend. Plus, the ability to opt out nonetheless puts them under social pressure to conform…or suffer possible taunts from classmates.

It’s regrettable that the “under God” addition places us into this situation, as the pledge was originally intended to unite rather than divide us all.

As before, I support the school wholeheartedly, and not just with my tax dollars. You, the teachers, and the support staff have been nothing but kind and gracious to my children, my wife, and myself, so this is not an easy letter for me to write. As the Pledge is wholly separate from the curriculum, however, and because I don’t see any good coming from its being on the daily program in my youngest daughter’s class, I propose that you ask the teachers to retire it. Any gained time can then be dedicated to academic teaching of the kind that public schools were indeed founded to provide.

With undiminished appreciation for you and the entire school staff,

I’ll let you know what happens next.

Have you been in a similar situation? How did you handle it, and with what results? Strategically, what do you think is the best way to approach this, and why? Hit us in the comments!

October 22, 2013 Announcing the Friendly Atheist Book Club
Browse Our Archives
What Are Your Thoughts?leave a comment