This past June, the Freedom From Religion Foundation sent a letter to Wallenpaupack Area Schools (in Pennsylvania) Superintendent Michael Silsby letting him know that if a clergy member ever again led a prayer at the district high school’s graduation ceremony, they would be hit with a lawsuit. Silsby wrote back in August: “The District will no longer have religious rituals as part of the commencement ceremony.”

So you can imagine how Silsby reacted when he learned what American Legion Post 311 wanted to do during Wallenpaupack Area High School’s Veterans Day ceremony next month. Normally, the event includes announcing the winners of an essay contest, singing patriotic songs, and listening to a guest speaker. But this year, the Legion made an additional, ungrantable request: Let our chaplain say a prayer at the assembly.

Silsby, not wanting to go through the same legal battle again, told them prayer wasn’t an option. It was a public school ceremony. There would be no mixing of church and state.

The veterans didn’t take the news so well. They’re now saying if the school won’t allow their chaplain to say a prayer at the event, they just won’t show up: 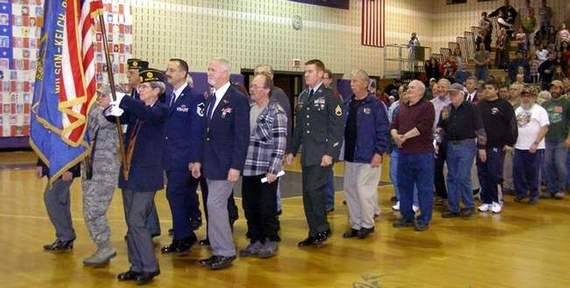 “We didn’t want to [drop out],” Thompson said, “but this country is falling apart. If the veterans don’t take a stand, who will?”

“Veterans Day is our day and all we wanted was for our chaplain to say a prayer. There are no atheists in foxholes. Saying a prayer does not establish a religion.“

Amazing how a group of veterans can fight for our country and fight to ignore one of the first things the Constitution says. Of course saying a prayer at a public school is an illegal endorsement of religion. Of course what they’re demanding is out of line and ridiculous. (And of course there are atheists in foxholes.)

It’s not disrespectful to say no to the veterans’ request. In fact, it’s downright patriotic to refuse their irrational demand. If the veterans can fight in wars, they ought to be able to handle a polite-but-firm “No, thank you.” And if they choose to whine about it and sit out the ceremony, it’ll go on just fine without them. There’s no shortage of veterans to honor and I’m sure the event will be memorable even if Jesus isn’t invited to the party.

October 22, 2013
Why Did This Christian Group Fire a Divorced Woman but Not Fire Divorced Men?
Next Post

October 22, 2013 An Open Letter to the Principal of My Kids' Elementary School: Let's Drop the Pledge of Allegiance
"Another example of the Prez O'Bummer legacy."
Satis214 U.S. Election Assistance Commission Chair Urges ..."
"A guy like Rush Limbaugh says he is a "Christian" but I've found that once ..."
Donald Preacher: I Just Cured Rush Limbaugh’s ..."
"Me too. Or should say, "so was I"?Actually I was a copy-editor and writing teacher. ..."
red-diaper-baby 1942 Christian Sues School After Daughter Gets ..."
"I asked a friend about this (he's a lawyer) and he said that the guy ..."
Donald Christian Sues School After Daughter Gets ..."
Browse Our Archives
What Are Your Thoughts?leave a comment