One of the biggest names in the global transgender rights movement is also an atheist, giving her home country yet another reason to target her.

Audrey Mbugua is a 29-year-old Kenyan trans woman who is suing the government of Kenya for failing to recognize her identity and name on legal documents such as her state-issued ID and her passport. She transitioned in 2001 and was diagnosed in 2008 with gender identity disorder, the medical diagnosis sometimes given to trans and gender-nonconforming individuals as a prerequisite for legal or medical gender transition procedures. But according to her governmental identification documents, she is still legally male and has a different name. 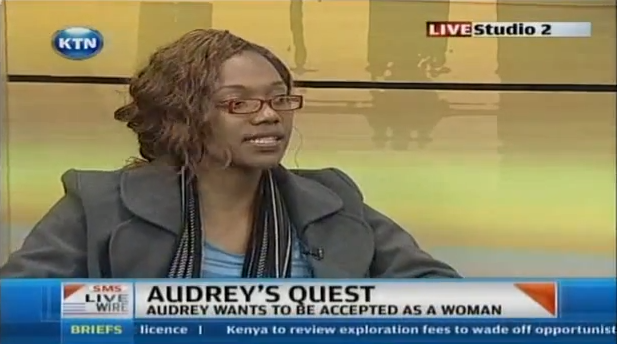 The Kenyan government has refused to update her documents accordingly, resulting in increased prejudice, discrimination, and difficulty finding a job in a country where being LGBT is illegal. (Not surprisingly, Kenyan media coverage of the case has been sloppy in using her correct name and pronouns.) In May, she sued the Attorney General and the Kenya National Examinations Council, but government officials are clearly taking their sweet time.

“We realise that the matter is tricky… We may have to liaise with the registrar of births and deaths for the necessary procedures to be followed before we can put in a proper reply,” a State lawyer said.

The national examiner initially told her that it could consider changing the gender indicator on the certificate of individuals who have “sufficient reason and evidence.”

Mbugua is also an atheist, which makes it all the more comical that the organization challenging her petition is a Christian group. The Kenya Christian Lawyers Fellowship argues that recognizing Mbugua’s correct gender “would set a precedent contrary to the Christian view of creation and encourage gay unions.”

This seems to be their only argument — that acknowledging a woman’s identity would be offensive to God. That doesn’t sound defensible to me, but there’s no telling what the decision in the courtroom might be.

“The applicant alleges to have planned corrective medical surgery, yet there is no proof that he [sic] was subjected to any,” wrote the group’s lead lawyer, Harrison Kinyanjui, in a submission to the Nairobi law courts.

Right off the bat, we know that it’s incredibly offensive to suggest that a trans person needs “fixing” via psychological treatment in order to feel properly accepted and adjusted in society. (Why not fix the people whose bigoted opinions are still so prevalent?) Furthermore, the fact that a religious group is taking charge in a strictly government-focused case is problematic for a whole host of reasons, articulated eloquently by one Montreal Gazette blogger this past week:

If ever there was a case of Christians trying to force their primitive, superstitious belief systems on other people — and the trans person in question here says she is an atheist — it is this one. To  complicate matters even more, the holier-than-thou Christians are confusing gender identity with sexual orientation, perhaps purposefully, or perhaps through sheer ignorance.

Audrey writes regularly for the Kenyan site Transgender Education and Advocacy, and there’s a full report on her attempts to change her name and legal documents. Here’s a snippet of her justified frustration with this entire process:

The State needs to be more responsive to the divergent needs of diverse Kenyans. I normally see women easily changing their names to adopt the names of their husbands. But, transgender women are treated suspiciously and insensitively when they adopt names that align their gender identities. Why is one class of citizens more relevant than the other? We will not allow caste systems in entitlement of rights and fundamental freedoms.

Her story has also gotten some attention from My Secret Atheist Blog and the popular trans-oriented blog TransGriot, and Daily Kos named her one of its “Transgender Heroes” back in June. I can’t think of anyone more deserving of the title, trans or not.

October 21, 2013
Atheist Churches for All? The Sunday Assembly Wants to Create a Global Platform
Next Post

October 21, 2013 Ask Richard: Newly Out as Gay and Atheist, Treated Hatefully by Uncle
"This genuinely makes me sad."
WallofSleep Christian Minister Gives God Credit for ..."
"Reality is that which, when you stop believing in it, doesn't go away.-- Philip K. ..."
Troublesh00ter WY Lawmaker Sinks Suicide Education Bill ..."
"They usually get back to it's all Satan's plan to turn people against God and ..."
McJakome Rick Wiles: Dr. Fauci Must Be ..."
"you know everything he says about God is trueSorry, but you only think you know ..."
Rob P Victim of Sex Predator Ravi Zacharias: ..."
Browse Our Archives
What Are Your Thoughts?leave a comment