Stephen Colbert was one of the headliners at the Alfred E. Smith Memorial Foundation Dinner on Thursday night — in honor of the former New York governor and Roman Catholic luminary — and his speech was as entertaining as you would expect it to be: 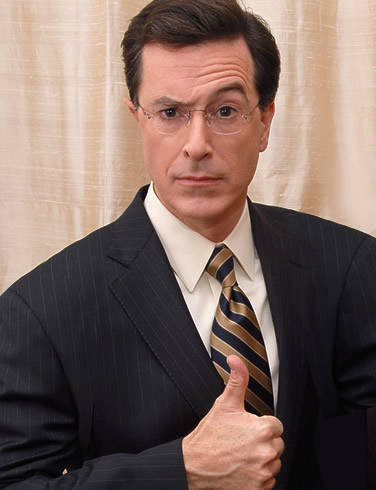 Over the course of 10 minutes, Colbert said New York Cardinal Timothy Dolan’s outfit of robes and cap made him look like a “flamboyant Zorro,” joked that former Secretary of State Henry Kissinger was dating a CNBC anchor, called Mayor Michael Bloomberg a “tiny man” and said the modest Pope Francis would’ve likely held the black-tie fundraiser at an iHop.

“I am proud to be America’s most famous Catholic,” Colbert declared, turning to Dolan, who was sitting next to him on a dais that included Gov. Andrew Cuomo, CBS anchor Scott Pelley and others. “And I’m sure the cardinal is thinking, ‘Stephen, pride is a sin.’ Well, cardinal, so is envy, so we’re even.”

He later joked, “I’m not getting paid for this. Do I get a plenary indulgence or anything?”

Colbert, as a devout Catholic, may be one of the only people who can rip on the Church’s foibles as its leaders look on with joy. That’s a power I hope he takes full advantage of while he can. Other than Pope Francis, who’s doing his best to spread a positive image of his Church despite its rules holding him back, there aren’t many Catholic leaders worth respecting. Colbert is one of them.

(via Whispers in the Loggia)

October 19, 2013
Why Oprah Winfrey Should Apologize to Atheists
Next Post