Dr. Ben Carson: The Secular Movement’s Promotion of LGBT Rights Endangers ‘Everything Else in the Bible’ October 18, 2013 Camille Beredjick

Dr. Ben Carson: The Secular Movement’s Promotion of LGBT Rights Endangers ‘Everything Else in the Bible’

At a conference in Illinois earlier this month, conservative neurosurgeon and Tea Party hero Dr. Ben Carson made some bold — though unoriginal — claims about the terror that same-sex marriage will surely bring upon society.

Speaking to the anti-LGBT-rights group Illinois Family Institute (IFI), Carson invoked the Biblical notion that the relationship between Jesus and his followers is a marriage. Clearly, he’s not okay with using the same terminology to describe committed, loving same-sex couples.

“Think about the implications of that,” he said. “When people come along and try to change the definition of marriage, they are directly attacking the relationship between God and his people.”

“Changing the definition of marriage” — like we haven’t heard that one before. Although the concept of getting rid of everything in the Bible is pretty tempting, Carson doesn’t seem to acknowledge that we already have changed the definition of marriage. For one thing, marriage is no longer considered to be a business transaction in which a man acquires property. (At least most of us don’t think that way anymore.) And, as one YouTube commenter pointed out, the “marriage” between God and his people is also compared to a relationship between a master and his slaves.

For the record, Carson is the same guy who earlier suggested to Fox News Channel’s Sean Hannity that same-sex marriage was tantamount to pedophilia and bestiality. Tea Partiers also love him because of the time he took over President Barack Obama‘s National Prayer Breakfast with a lecture about taxes.

At the IFI conference, he lamented the “secular progressive movement” for establishing new societal standards that his fellow conservatives are too closed-minded to acknowledge. (The horror!)

In his speech to IFI on Friday, Carson opined that the “secular progressive movement” was like a “new group of mathematicians who come along and say, ‘Two plus two is five.’”

“The new ones say, ‘If it’s not five for you, you’re a mathophobe,’” he added. “We just have to continue to make it clear because they want to say that anybody who doesn’t believe what they believe is a hater.”

I don’t need to tell you how illogical and absurd this analogy is. If anything, this demonstrates that anti-equality advocates are simply running out of ideas. As we all know, the Bible is far from a leading source on the ethics of same-sex marriage, and even if it were, you can’t just pick and choose what portions of the Bible to follow. If being a secular progressive endangers these antiquated “morals,” I’m damn proud to call myself one. 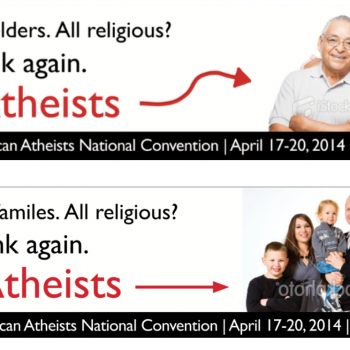 October 18, 2013
These Atheist Billboards Were Deemed 'Too Controversial' for Salt Lake City, Utah
Next Post

October 18, 2013 Hispanic-American Adults Are Less Catholic and More 'Unaffiliated' Than Ever Before
"Northern Idaho, more sensible?"
InDogITrust NY Gov. Kathy Hochul to Church: ..."
"Sometimes, to make a cross you have to break a few eggs...."
starskeptic Preacher: God Will “Destroy” America’s Enemies, ..."
"Won't we be embarrassed when the reports of her full recovery appear in NEJM?"
InDogITrust Conservative Pastor: I’m Going to Florida ..."
"https://uploads.disquscdn.c..."
Akira625 Preacher: God Will “Destroy” America’s Enemies, ..."
Browse Our Archives
What Are Your Thoughts?leave a comment