Last week, when the Cannon County Board of Education (Woodbury, Tennessee) held its monthly board meeting, nothing very eventful happened until the board members discussed next year’s school calendar.

This is normally a quick, breezy process. Just approve it and move on.

But one of the board members was offended by what he saw on the proposed schedule:

“What is the possibility of calling Winter Break Christmas Break instead?” [Chris] Blackburn asked.

“I am frankly tired of being pushed around by people that want to take Christ and God and Christmas and everything out of the school system,” Blackburn said. “They want to take prayer out of school and they want to take it out before ballgames. I am in favor of this calendar as long as we call it Christmas break.” 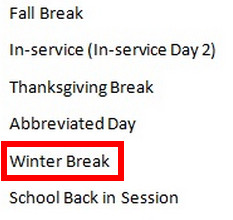 Students and faculty members are welcome to pray on their own time, silently — no one has ever tried to stop them from doing that. Blackburn, who doesn’t appear to give a single damn about the Jewish and atheist and other non-Christian students in the district, is specifically saying here that his religion matters more than any other winter holiday.

At least someone else on the school board had the good sense to point that out to Blackburn:

“We put this (calendar) in the paper, on our website and it makes me wonder what kind of statement we are making,” Sanders said. “I don’t want to take the bully aspect here but those same people who wanted it called ‘winter break’ before can come back and we could address it at that time, but I share some of the same concerns (as Blackburn).”

The motion was made to change the name and the calendar was unanimously approved.

Okay, I was wrong. The entire school board is made up of spineless bigots who can’t see through their Jesus-tinted sunglasses.

Look, this isn’t the biggest problem a Christian school board has ever inflicted upon a district, but this sort of decision-making — the kind that disrespects the beliefs of many of the students because Baby Jesus might shed a tear — is the sort of mentality that leads to lawsuits and could cost the district (and, therefore, taxpayers) lots of money.

They can expect a letter from the Freedom From Religion Foundation shortly. And anyone in the area should take the issue up in person at their next meeting. School boards get away with shit like this all the time because they know so few people are paying attention.

If we let them do something this minor now, we have to wonder how they plan to push Jesus on the students later.

(By the way, the Cannon Courier reported on the meeting, but the article is behind a paywall. As if that could ever stop my readers from giving me all the details…)

October 17, 2013 What Has Religion Done for Us This Month? Episode 11
"The least amount of money you wind up spending on a pet is the initial ..."
patty thomas Evangelical Pastor Faces Prison Time After ..."
"McConnell was just being honest. That's what political parties do. They try to make the ..."
Trystin Beaumont Tony Perkins: Getting Rid of the ..."
"why do they hope po r the end of the world? are their lives really ..."
Gwen Pryce In Emotional Video, Theologian Paul Maxwell ..."
"> "wash the taste ... out of my mouth"I have recently discovered a new mouthwash. ..."
Die Anyway Defrocked Priest in East Timor Faces ..."
Browse Our Archives
What Are Your Thoughts?leave a comment