For the comic book fans out there, today is the publication date of the first issue in the four-part series S.H.O.O.T. First by Justin Aclin with illustrations by Nicolás Daniel Selma:

The title will center around a group of hardcore atheists who protect mankind from the supernatural threats that they do not believe in.

“It’s about a team called the Secular Humanist Occult Obliteration Taskforce, who use the power of their own disbelief (as filtered through sci-fi weaponry) to protect humanity from supernatural creatures that seek to do us harm,” Aclin told Parallel Worlds.

“But for S.H.O.O.T., that means demons, angels and everything in between.”

The team dismiss all the manifestations of ghouls and monsters as ‘Outside Actors’ — extra-dimensional attempts to manipulate mankind’s primal fears.

It’s actually a very fascinating approach to the atheist conversation. We’ve said for a long time that doubt is the enemy of faith, that critical thinking can vanquish religious beliefs, and this graphic novel puts those ideas right at the center of a superhero-genre story: 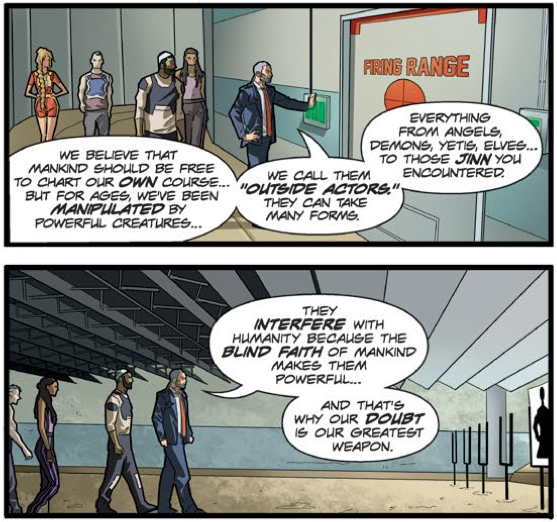 I have to say, having read the first two issues, I also appreciate that one of the subplots involves an African-American woman dealing with the Big Questions from her curious son and the conflicting advice of her religious mother: 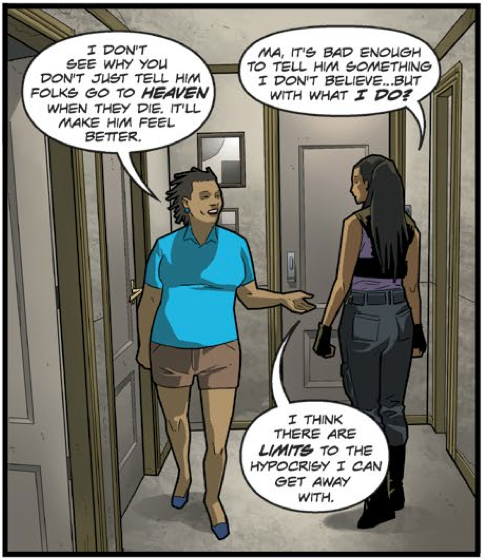 I asked Aclin a few questions about his series and how his beliefs impacted the storyline and he graciously responded at length:

What would atheists enjoy about this series?

I think, even more than the fact that this is the first action/adventure comic I can think of where all of the main characters are atheists, they’ll enjoy the fact that it’s about the emotional life of atheists. When I started finally letting go of my religious self-identification, I had never seen any story that explored what that was like. Every story you ever see about someone having a crisis of faith seems to end with the faith being reaffirmed. I wanted to see a story that explored what the emotional experience of being an atheist is like, and what the unique struggles and joys of that are. And, maybe I’m weird, but I wanted to see that explored through a comic book with monster fights.

The real emotional crux of the series is laid out on the first page, in which the main character, team leader Mrs. Brookstone, gets asked by her young son what happens after you die, and she doesn’t have an easy answer to tell him. The conversation gets interrupted, but I think it’s safe to say that if it’s important enough to kick off issue 1 with it, it’s a conversation that you’ll see resurface later on in the mini-series.

Do you think religious people might be offended at any aspect of your story?

There’s a surface-level kind of offense that could be taken to a subplot where the Vatican is working to stop the team, but I don’t think of them as cartoonish villains. I think they’re perfectly within their rights to try to stop a team whose marching orders include killing angels, and in a different story the Vatican would probably be the heroes… but this isn’t that story.

I think the religious people who should take offense would never see themselves in the story, even though I based the villains off of them. In the world of S.H.O.O.T. First, anything that might be considered a supernatural creature is actually an Outside Actor, an extra-dimensional being which can self-evolve and that feeds off the faith of humanity. And many of the Outside Actors fear the degree to which science and reason are affecting humanity’s faith, and they’ve hatched a plan to bring about an Apocalypse and wipe that away. That’s very much based on a certain type of Fundamentalist that’s actively working to bring about the end times, which is a concept I just find abhorrent. I was raised Jewish, and when I realized that there was a group of Christians out there who were cheerleading Israel’s worst tendencies because they think it’s going to bring about the end of the world, and they’d like that, I was horrified. And I took that horror and created monsters out of it.

What topics related to faith were you glad you could explore?

I think the best stories come from not starting with a message you want to deliver, but starting with a question you want to explore. I started working on S.H.O.O.T. First when I first began letting go of thinking of myself as believing in god, and I had a lot of questions, “How do you talk to your children about death” being chief among them. But also, “How do you find meaning in life if you don’t believe that we were put here for a purpose?”

Religion has been around nearly as long as humanity, and it persists in part because it’s hugely comforting. I needed to find meaning beyond that comfort, and writing this story helped me to do that. And even if it had never seen print, it would be tremendously important to me because of that.

What advantages does a comic book give you to tell this story that a more traditional book might not lend itself to?

The truth is I love comics, and I’ve always wanted to write comics, and my favorite kinds of comics are the ones that explore something recognizable and universal about the human condition through the lens of stories where there are also big exciting fight scenes. So I wanted to write the kind of comic that I like to read.

As far as advantages, I think the most obvious one is that you get incredible visuals in the art from my co-creator Nicolas Daniel Selma and our colorist Marlac. It’s one thing to say the team is fighting a Jinn that swallows people and stores them in its body, and it’s another, far creepier thing to get to see it. I suppose you could get visuals from a movie as well, but that’s another advantage that comics has: this is a story where the main characters are an African-American woman and an Afghan man. That would never in a million years get made into a big-budget, special effects-laden movie. Working with Dark Horse Comics has afforded us incredible freedom to tell exactly the story we want to tell.

If you can’t get to a comic book shop, you can order the digital edition of the first issue right here.

October 16, 2013 Woman Sues InterVarsity Christian Fellowship for Firing Her (but Not Men) After a Divorce
Browse Our Archives
What Are Your Thoughts?leave a comment