In Tanzania and other East African nations, people with albinism don’t just worry about developing vision problems and skin cancer — common afflictions among those whose bodies don’t produce enough melanin. They also have to keep an eye out for assassins who want to harvest their body parts, says Scientific American. The crimes are motivated

… by superstitious beliefs that albinos’ body parts can lead to power and wealth. A rash of more than 100 crimes against individuals with albinism have been reported in the past seven years in Tanzania, according to the Tanzania Albino Society, an advocacy organization. 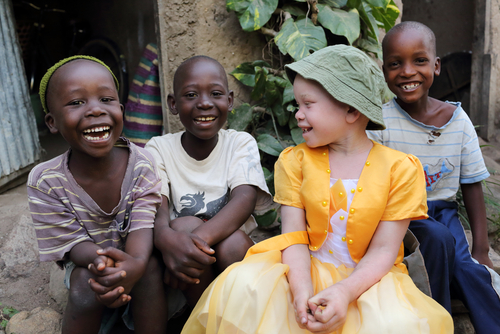 The authorities are trying to crack down on witch doctors who make albino potions and charms, and on the buyers of such wares. According to a recent United Nations report, in one incident,

… an unidentified individual tried to sell a man with albinism for $250,000.

Children’s body parts are especially in demand, and from there it gets even more gruesome. The U.N. report states:

“Some even believe that the witchcraft ritual is more powerful if the victim screams during the amputation, so body parts are often cut from live victims, especially children. The use of children is likely linked to the pursuit of innocence which, it is believed, enhances the potency of the witchcraft ritual.”

One source claims that the remains are used like this:

[F]ishermen on the shores Lake Victoria weave albino hair into nets. Bones are ground down and buried in the earth by miners, who believe they will be transformed into diamonds. The genitals are made into treatments to bolster sexual potency.

… in Tanzania alone there had been 72 murders of people with albinism since 2000, only five of which have resulted in successful prosecutions. … [A] widespread belief that individuals with albinism cannot die and that they may just “disappear” contributes to a lack of empathy for the crimes.

In other parts of the world, superstitions surrounding albinism are just as irrational — but there, the outlandish beliefs may protect rather than harm. For instance, to some Native American tribes, albino animals are sacred and may not be killed. That’s the case for the indigenous Mi’kmaq people of Nova Scotia, Canada, who flew into a tizzy the other day when visiting hunters, unaware of Mi’kmaq lore, shot and killed a white moose.

“We know the significance and we’ve been teaching that to the non-native population for almost 500 years — about the importance that this and other white animals played in our lives. We are not to harm them in any way, shape, or form because they could be one of our ancestors coming to remind us of something significant that’s going to happen within our communities.”

Same humbug, though of an infinitely kinder variety.

October 16, 2013
Woman Sues InterVarsity Christian Fellowship for Firing Her (but Not Men) After a Divorce
Next Post