Malaysia isn’t considered a progressive country for a number of reasons. Last year, its Education Ministry issued guidelines to identifying gay or lesbian children so that their “symptoms” could be corrected (Example: Gays wear “V-neck and sleeveless clothes”).

The International Humanist and Ethical Union noted that Malaysia requires its citizens (over the age of 12) to carry ID cards that list their religion. And while officials would argue there’s religious freedom, two states in Malaysia passed laws prohibiting anyone from leaving Islam (though they theoretically can’t be enforced):

Amending the penal code is the exclusive prerogative of the federal government. Despite contradicting federal law, the state governments of Kelantan and Terengganu passed laws in 1993 and 2002, respectively, making apostasy a capital offense. Apostasy is defined as the conversion from Islam to another faith. No one has been convicted under these laws and, according to a 1993 statement by the Attorney General, the laws cannot be enforced absent a constitutional amendment.

Yesterday, one of the country’s Court of Appeals took the largest backward step yet: 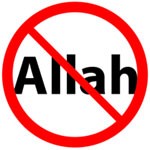 A court in Muslim-majority Malaysia ruled Monday that only Muslims are permitted to use the Arabic word “Allah” to describe God, overturning a lower court’s 2009 decision that allowed others to use the word.

“The usage of the word ‘Allah’ is not an integral part of the faith in Christianity,” Chief Judge Mohamed Apandi Ali said in the ruling, supporting the government’s case.

(You can read Ali’s decision here and his colleagues’ here and here.)

This may be even worse than a blasphemy charge. We’re used to hearing countries ruled by fundamentalists argue that you can’t denounce God or speak poorly of religion. Ali’s ruling says that you can’t even use the word “Allah” — a word that means “God” — unless you’re Muslim and talking about the Islamic God. So a Catholic newspaper that uses the word “God” and translates it into the Malay language (“Allah”) is forbidden from doing so:

“It is a retrograde step in the development of law in relation to the fundamental liberty of religious minorities,” The Herald’s editor, the Rev. Lawrence Andrew, said after losing the case.

Andrew said he would appeal to Malaysia’s highest court.

What’s the fear? You won’t believe this:

However, some Muslim groups have said that the Christian use of the word Allah could be used to encourage Muslims to convert to Christianity.

“Allah is not a Malay word. If they [non-Muslims] say they want to use a Malay word they should use Tuhan instead of Allah,” Zainul Rijal Abu Bakar, a lawyer representing the government, told the BBC.

Oh no, not conversion! If your faith is so flimsy that the use of the word “Allah” will change your mind, you have bigger problems than translation.

(It’s worth noting that there may be politics involved in this ruling, which is explained here.)

We often hear the claim that Christians and Muslims pray to the same God; they just call him different things. This ruling contradicts that belief. It also calls into question how seriously Malaysia takes the idea of freedom:

This could end up being the most important religious liberty story of the year, with wide-ranging implications for religious pluralism in southeast Asia. At issue are three of the minority rights at the very core of modern rights-based polities: freedom of speech, freedom of religion, and freedom of the press.

I’m not sure whether the blame here rests on government officials or general adherents of Islam, who think they get to control the word choices of other people. Keep in mind this case wasn’t about someone using the word “Allah” in a negative way. It was just about using that combination of letters in that order, period.

In theory, this also means non-Muslims authors would be forbidden from using the “A” word in a book. Non-Muslim students couldn’t use it in an essay about Islam.

It makes as much sense as McDonald’s saying that only regular customers could say the name of the company.

What I haven’t seen in any of the stories is what the punishment would be for a non-Muslim who used the word. Would they be fined? Jailed? Slapped on the wrist? It’d be great to see a good number of the two million Christians (and unknown number of non-religious citizens) in the country engage in some civil disobedience and use the word “Allah” as much as possible. (Or, if you want to be sneaky, write reports about how you’d like to vacation in Tallahassee or go to the Lallahpalooza concert.)

October 15, 2013
A Journalist Writes About the 'Fight to Save Children from Faith-Healing Homicide'
Next Post