The Franklin County School Board in Tennessee had a very important discussion this week at their monthly work session: Should the Parent-Teacher Organization pray at meetings? 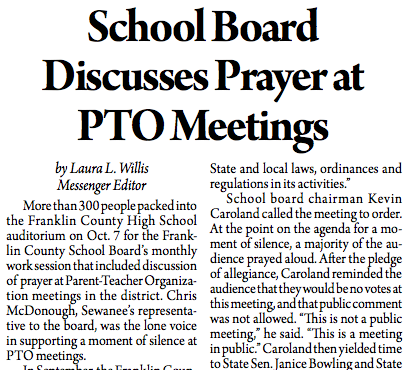 The school board’s attorney suggested that a moment of silence would be okay, but a prayer crossed the line — Since the PTO was a school-sponsored group, it was violating the law.

But the residents of the community didn’t accept any of that reasoning.

School board chairman Kevin Caroland called the meeting to order. At the point on the agenda for a moment of silence, a majority of the audience prayed aloud.

It only got worse from there. Check out what happened when the only voice of reason on the school board suggested they should all listen to the lawyer:

“I am afraid I disagree with all of you,” [board member Chris McDonough] said. “North Lake is an excellent school, and we want to make sure as many parents as possible participate in the PTO.” Prayer at the meetings could be a “stumbling block,” he said. “These are things that make people feel excluded.”

McDonough’s remarks were met with boos from members of the audience.

“There are people in this county who don’t go to your churches and people who don’t believe what you do,” he said. “A moment of silence lets people be together, and no one feels alienated,” he said.

Caroland had to quiet the crowd so that McDonough could finish his comments.

This is a crowd that wants their kids’ school district to get sued.

This is a crowd that doesn’t get that Liberty Counsel’s offer of “free” legal assistance won’t cover the attorney’s fees the district (and taxpayers) will have to pay the Freedom From Religion Foundation after losing the case. (Just ask the Jackson City Schools.)

This is a crowd that needs to be ignored so the people in charge can abide by the law and do what’s right for the students.

October 12, 2013
Yes, Justice Scalia Deserves to be Mocked for Admitting He Believes in the Devil
Next Post

October 12, 2013 A 'Worship' Cross on Public Land is About to Become a Problem for Middleboro, Massachusetts
"OT: Oh, I wish a mother fokker would say this to my face...Kevin McCarthy: 'Everybody ..."
WallofSleep Christian Who Spread “Prophecies” About Trump’s ..."
"Oh like your pathetic response to how Irish law led people in the medical profession ..."
CriticalDragon1177 Arizona Republicans File Bill to Punish Abortion ..."
"Absolutely not, those corporations gotta get paid ya know. But there is a shortage of ..."
WallofSleep Christian Who Spread “Prophecies” About Trump’s ..."
""...threaten human life." Dude whose "holy" book has God (supposedly) raining down a genocidal flood ..."
Daniel rotter Catholic Bishops Condemn Pro-Choice Joe Biden ..."
Browse Our Archives
What Are Your Thoughts?leave a comment