Steve Vincent, a self-described agnostic, supports the separation of church and state, and he was rightfully disturbed by the fact that the Rancho Cordova City Council (in California) opened its meetings with an invocation prayer.

Since it’s a non-sectarian prayer, a lawsuit may be out of the question, but Vincent decided to jump into the fray by getting ordained through the Universal Life Church and signing up on Facebook to deliver an invocation:

“Fortunately, I found the city to be very open and courteous to my request, although they did inquire what church I was with, and they joked a bit when I said they can put me down on the agenda as ‘Church of the Flying Spaghetti Monster,’” he said. 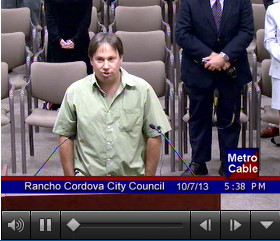 “God? I’m not sure if you’re there. You’re an agenda item on our government meeting. I’m not sure that’s what you had in mind for prayer, God.”

The best part about the prayer may be that there are people in the audience with hands clasped and heads bowed.

It may have been a publicity stunt, but it’s one any one of us could do. It was free, Vincent said, and it took only seconds to sign up. Maybe if more non-Christians followed his lead, many city councils would do away with the useless tradition altogether.

(Thanks to Judy for the link)

October 9, 2013
This French Commercial Features Two Catholic Priests in Bed About to Get It On
Next Post